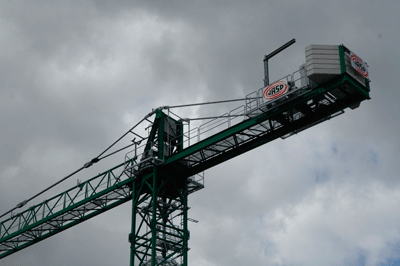 The J360 was unveiled at the Intermat construction equipment exhibition in Paris, France on 16 April. Maximum capacity is 18 tonnes and the longest jib is 60 metres, at the end of which capacity is 4 tonnes.

It is designed so that the distance from the highest hook position to the top of the tower head is as small as possible. It is comparable with and less than on many flat top cranes, the manufacturer said. The J360 integrates a tie so the jib deformation is much lower than with flat top designs and jib assembly is quick and easy in sections, Jaso continued.

Tower sections are 2.16 x 2.16 m and the counter jib is short, at 12.9 m for a jib of up to 40 m, the manufacturer said. As with other models in the series, all components can be transported in closed containers.

This H series is designed in accordance with European standard EN 14439. It also has an optional clamp braking system for load hoisting, to comply with demands in other countries where this extra brake is specified.

Indicators are fitted for all working parameters and there is a fault diagnosis function. Event recorders and so-called Black Box systems can be fitted and it is also compatible with all anti-collision systems on the market, Jaso said.

Continue Reading
637
Share LinkedinTwitterFacebookEmailWhatsApp
Subscribe to our newsletter
Sign up here to get the latest news, updates and special offers delivered directly to your inbox.
You can unsubscribe at any time
Leave a comment