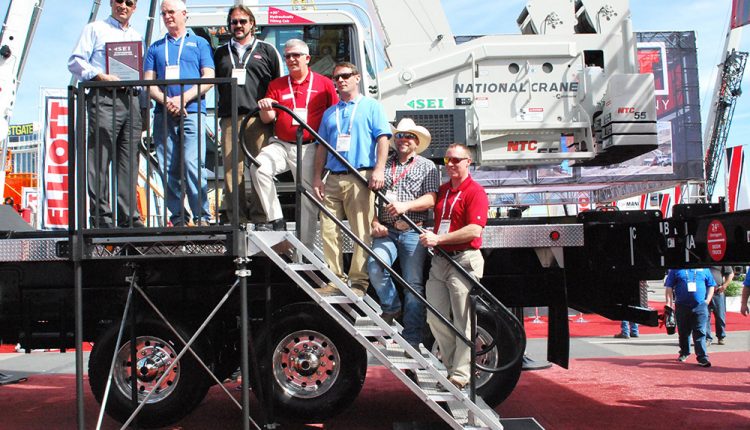 Manitowoc presented Stephenson with a commemorative plaque during the ceremony, and three of the five initial retail customers—Iron Stag, Allison Crane and Bob’s Crane Service—were treated to a champagne toast. Stephenson’s heavy investment in expanding its own fleet with NTC55s was commemorated, as well.

The all-new 55 USt NTC55 is an evolved truck crane “replacement” that can maneuver into the tight working quarters typically reserved for a truck crane, but with the added features of a boom truck to increase versatility on the job site. The new model boasts a four-position outrigger system that gives the crane the reach and capacity of a 55 USt boom truck when fully extended. In tighter working quarters, such as those found in urban environments, the NTC55 can retract its outriggers to 75% span to take up less space while maintaining greater capacity than competing truck cranes with similar footprints. A new hydraulically removable counterweight system, 80° max boom angle and a 20° tilting operators cab—a first for National Crane—further add to its operator-centric design.

Continue Reading
439
Share LinkedinTwitterFacebookEmailWhatsApp
Subscribe to our newsletter
Sign up here to get the latest news, updates and special offers delivered directly to your inbox.
You can unsubscribe at any time
Leave a comment