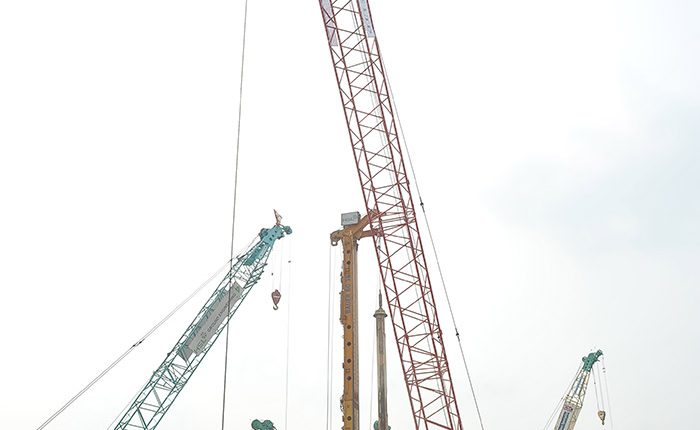 Two crawler cranes, a 100 t capacity Manitowoc 11000-1 and an 80 t capacity Manitowoc 8500-1, are being used by Fuchi Pte Ltd., to support strutting and waler positioning efforts at Springleaf Station, a new station on the rapidly growing Mass Rapid Transit (MRT) subway system in Singapore. Springleaf is part of a series of stations comprising the new Thomson Line which is being built by the Singaporean government’s Land Transport Authority (LTA).

Work for the cranes started in 2015 and will conclude in 2018. When the project is completed in 2019, the 30 km Thomson Line will have 22 stations including six interchange stations connecting to all other existing MRT lines.

The first part of Fuchi’s work involves lifting steel struts, which weigh between 2 t and 6.5 t, and lowering them into the excavated ground of the station to support the earth while the concrete walls are built. These struts are lifted by Manitowoc crawler cranes at radii to 16 m. To handle the lifting work, the Manitowoc 11000-1 is rigged with 37 m of boom, and the Manitowoc 8500-1 with 36 m of boom.

On average, one or more struts can be placed each day with the rate of placement dependent on the size and positioning of each strut as well as other scheduled work for the day. Given that almost 400 struts have to be set, the job site virtually runs 24 hours a day to prevent delays. Once the concrete walls are set in the tunnels, the Manitowoc cranes will be used to remove the struts and walers.

“Fuchi has approximately 30 projects running simultaneously, of which 10 of them are MRT projects. Some of the ongoing MRT projects include the Caldecott, Outram Park and Gardens by the Bay stations, which are also part of the the Thomson Line,” said Harjit Singh, project manager at Fuchi. “Given the intensity of our operations, we cannot afford any downtime so the cranes we use must be highly reliable. From the time we purchased our first Manitowoc cranes, we were impressed with the quality of its engineering and have relied on them ever since.”
The Manitowoc 11000-1 and 8500-1 are available anytime, although lifting work is typically minimized between 10 pm and 5 am due to noise disturbance – affecting nearby residents – and visibility factors attributed to a lack of natural light.

In addition to the steel struts, the crawler cranes will be involved in positioning walers, which serve as brackets to hold the struts in place. The cranes are relocated on a weekly basis to different positions on the job site but generally do not move too far, with the aim of handling as much work as possible from a single location.

“These smaller capacity crawler cranes from Manitowoc are well-suited to the compact job sites that characterize Singapore,” he said. “They’re strong, reliable and easy to get on and off job sites. In this case they’ve also been able to satisfy the very stringent requirements of the LTA. Infrastructure development in Singapore has been ongoing for decades, so contractors here know exactly what they need from a crane. The range of smaller capacity crawler cranes from Manitowoc not only delivers the performance required, but also boosts value for owners through better productivity, lower running costs and higher re-sale values.”

Continue Reading
613
Share LinkedinTwitterFacebookEmailWhatsApp
Subscribe to our newsletter
Sign up here to get the latest news, updates and special offers delivered directly to your inbox.
You can unsubscribe at any time
Leave a comment