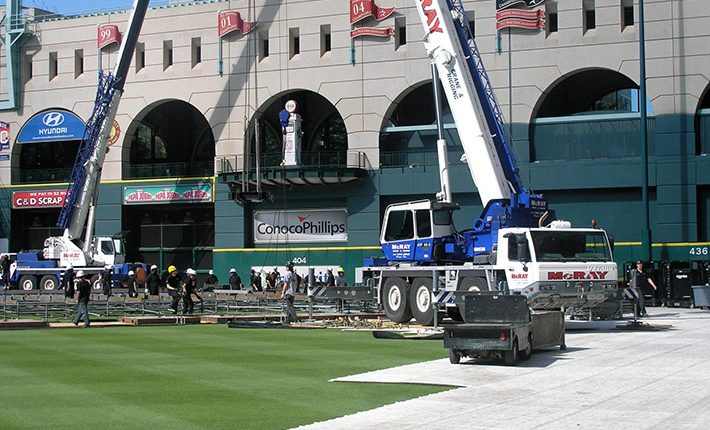 When Daniel and Vickie McRay opened the doors to their crane rental business in 1985, they had two basic ideas in mind: To provide uncompromising customer satisfaction, and remain at the forefront in developing new and innovative ideas. In 2015, the company continues to stand behind these principles as it celebrates its 30th anniversary.

Although the McRays had experience in the crane rental industry—Dan had been involved since 1970—the two were challenged with an economic recession in its early years. McRay Crane & Rigging took the opportunity to build its business on loyal employees and satisfied customers. Many current customers have been with the company since its start, and a number of employees have been with the company for more than 15 years.

Today, McRay Crane & Rigging owns and operates a mobile crane rental fleet with lifting capacities from 18 to 300 tons. Unique projects for the companyhave included erecting pop/country superstar Taylor Swift’s complex concert stage. With more than 100 crew members and two cranes from McRay, the stage and two sound and light towers were built in the 36-hour timeframe. Special care was required to complete the setup without damaging the turf at Minute Maid Park, home of the Houston Astros.

Additionally, its rigging department includes equipment like forklifts from 8,000 to 80,000 lbs., alternative lifting devices like jacking systems and skates, and a variety of rigging gear from slings to specialty lifting equipment. Its team of certified personnel has the ability to lift, relocate, set, and align equipment like chillers, boilers, and manufacturing equipment, as well as load and unload heavy aircraft cargo and medical equipment, throughout the Houston metro, south central Texas, and the Gulf Coast region.

Although the crane industry lost Daniel in 2006, his family felt that they must continue to improve the quality and range of services offered by McRay Crane & Rigging Inc. Vickie, the McRay family, and Jerry Pleasant, vice president and general manager, have continued on with Dan and Vickie’s vision that has been successful for three decades.
In Dan’s memory, McRay Crane & Rigging holds a Memorial Ride and Benefit that gives back to the industry he served for more than 35 years. In 2014, the event raised $100,000 from the ride, gun raffle, barbecue lunch, and live auction. Proceeds go to help families in the industry that have been financially impacted by unexpected medical expenses due to cancer-related causes.

Continue Reading
424
Share LinkedinTwitterFacebookEmailWhatsApp
Subscribe to our newsletter
Sign up here to get the latest news, updates and special offers delivered directly to your inbox.
You can unsubscribe at any time
Leave a comment