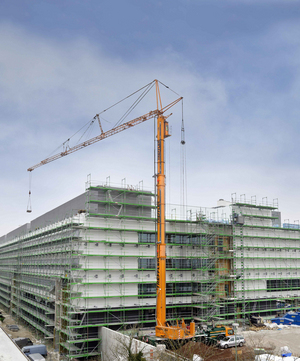 In greening the roof of a new surgery centre in Munich, the Liebherr mobile construction crane MK 100/110 was able to prove its excellent handling capacity. In doing so, it had the advantage of a maximum working radius of 52 metres at a hook height of 33 metres.

With an investment of 135 million euros, the medical centre of the University of Munich (LMU) is building Europe’s most modern surgery centre at its campus in Großhadern. Once it is completed in 2013, the new building will have a total floor space of 14,600 square meters and be able to house 32 operating theatres. In addition, an interdisciplinary emergency intensive care unit with 72 beds will be established.

Gaissmaier Landschaftsbau GmbH & Co. KG (Freising) installed a variety of materials on the roof, which is 6,000 m ² large and 22 m high. Between the middle of September 2011 and the end of April 2012, the surface of the roof edge was initially covered with about 7,500 grass paving stones of various sizes. The honeycombs of the paving stones were filled with approx. 300 tonnes of gravel and the inside area of the roof, with a size of approximately 3,000 m², was filled with more than 300 m³ of substrate for roof gardens. An MK 100/110 was hired from the Treffler (Munich) crane-rental company to handle this high volume of material, and to do the job quickly and efficiently. Finally, the extensive vegetation mats that were respectively up to three square metres large were relocated on to the roof.

The MK 100/110 saved working hours due to its excellent mobility and five drive programmes, which meant that it could be redeployed quickly and easily. Certain working areas on the roof were very narrow, with a width of only 1.20 m. The crane driver had an uninterrupted view of everything, due to the infinitely variable, height adjustable, elevating operator’s cab. The Liebherr MICROMOVE fine positioning mode was an advantage in positioning loads with millimetre precision.

The extremely large working radius of the Liebherr mobile construction crane was also decisive. Even when the jib is in a luffed position of 15 degrees, the boom length is still 50.2 m.

Continue Reading
Liebherr-Werk Biberach GmbH
492
Share LinkedinTwitterFacebookEmailWhatsApp
Subscribe to our newsletter
Sign up here to get the latest news, updates and special offers delivered directly to your inbox.
You can unsubscribe at any time
Leave a comment