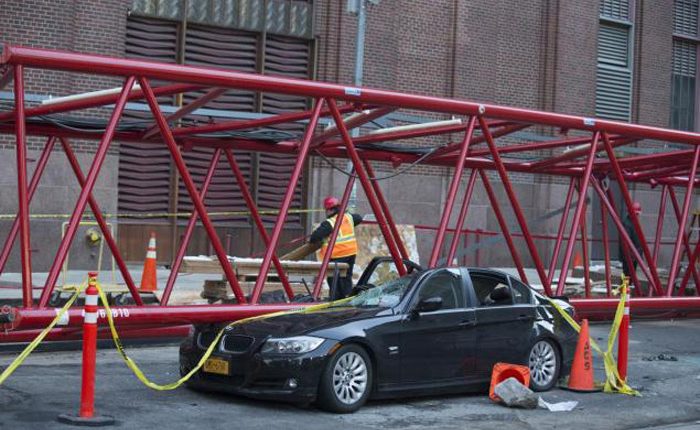 Three days after a lattice-boom crawler crane toppled in Manhattan as its crew was lowering it to comply with local regulations for operating in windy situations, New York Mayor Bill de Blasio announced tighter crane safety regulations. The crawler crane collapse killed one person and injured three others last Friday.

According to the New York Daily News, crawlers will now have to be removed from operation and properly secured whenever steady winds are forecast to exceed 20 mph, or gusts, to exceed 30 mph, de Blasio said. When that happens, the City Department of Buildings will send advisories to crane engineers, and those who don’t comply can face stiffer fines—which rise to $10,000 from the current $4,800. When heavy wind is forecast for the following morning, the new rules will mean that cranes will have to come down the night before.

The city also plans to ramp up enforcement of street and sidewalk closures due to crane activity: Police, firefighters, and officials from the departments of Buildings and Transportation will be ordered to keep pedestrians out.

Crane operators will also now be required to notify people who live and work in the area when a crane is moved. The only notification currently required is when a crane is installed. The city will also form a task force on crane safety to develop additional regulations.

The mayor acknowledged that it appeared the crew was doing the right thing, working to secure the crane as the wind picked up, and to divert drivers and pedestrians.

Continue Reading
353
Share LinkedinTwitterFacebookEmailWhatsApp
Subscribe to our newsletter
Sign up here to get the latest news, updates and special offers delivered directly to your inbox.
You can unsubscribe at any time
Leave a comment