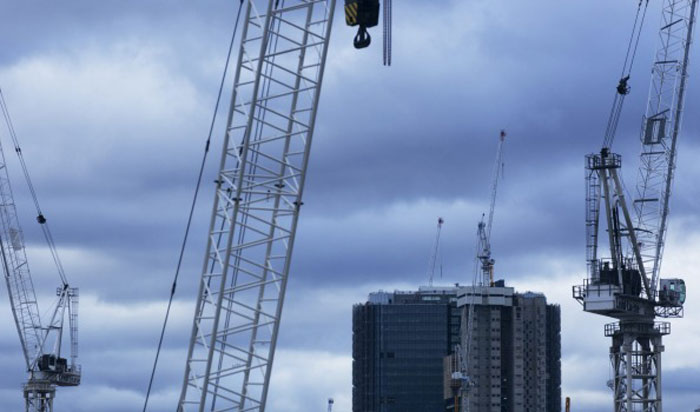 Australia’s biggest housing construction boom boosted the number of cranes scattered across city skylines by more than a quarter to 539, the latest RLB Crane Index shows.

The number of cranes deployed on residential buildings rose in every mainland capital except Darwin as the total number of fixed cranes on sites rose from 426 six months ago.

Almost 80 per cent of Australia’s cranes are now engaged in building new homes, the highest proportion recorded to date by the half-yearly index.

At the same time, the lowest-ever proportion – just 8.7 per cent – are for commercial buildings, primarily offices. The number of commercial cranes fell by 10 to 47 over the six-month period.

“Those of us in the building industry should all be very grateful that the market is doing what it’s doing,” said Brookfield Multiplex chief executive John Flecker, of the high proportion of residential work.

“I don’t think, as an industry, it’s catastrophic. These things do cycle and the other sectors will pick up. If all you did was residential and you grew substantially because there’s a lot of work at the moment, you’d have to question how sustainable that was in the longer term, but if you’re diversified, you should be fine.”

Mr Flecker said one-third of Brookfield Multiplex’s workbook was residential, a figure he said was materially higher than the historical average, but not a problem from a diversification point of view.

Darwin, where the total number of cranes halved to just three in a slumping residential property market, was the exception in a report that showed an increase in each mainland capital and the Gold Coast.

New housing starts rose to a record 211,976 in the year to June, pushed by apartment construction that has doubled over the past decade. Short-term, more growth is likely, but it is expected to then tail off.

New dwelling approvals – a forward indicator – touched a new high of 226,415 in the year to August, official figures show. But even so, the 0.4 per cent month-on-month growth was the slowest rate of gain in almost a year.

The picture in other sectors is mixed. The national number of health project-related cranes fell a net seven to 11. Cranes dedicated to retail projects slipped by four to 10 in total. Cranes used for education projects increased, as did those on recreation projects. In WA, the $918 million Perth Stadium project installed eight new cranes over the period.

The biggest increase came in Sydney, which added a net 58 cranes to its skyline – 47 of them residential – for a total of 220.

Melbourne-based MCG Cranes is a family company that owns 29 fixed cranes, all of which are employed on residential projects, owner Mick Martin said. The concentration was a strategic risk, Mr Martin said.

“I’d much prefer to have infrastructure work and commercial work plus residential,” Mr Martin said. “At the moment, all we’re doing is residential, which is great, but how long is it going to keep up? That’s the scary part.”

Continue Reading
445
Share LinkedinTwitterFacebookEmailWhatsApp
Subscribe to our newsletter
Sign up here to get the latest news, updates and special offers delivered directly to your inbox.
You can unsubscribe at any time
Leave a comment