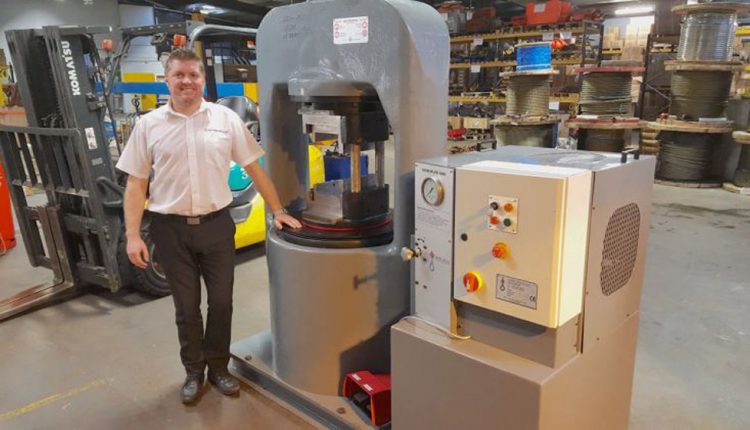 Rope and Sling to Debut at LiftEx 2017

Lifting and rigging equipment supplier Rope and Sling Specialists Ltd. (RSS) will exhibit for the first time at next year’s LiftEx trade show, which takes place at the International Centre, Telford on 29-30 November 2017.

LiftEx is an annual event hosted by trade association, the Lifting Equipment Engineers Association (LEEA). RSS was among visitors to the 12th staging of the show last month (November) when it drew an international audience to exhibition aisles and a co-located conference at the Aberdeen Exhibition & Conference Centre in Scotland.

Steve Hutin, managing director at RSS, said: “We’re frequent visitors to LiftEx and we have seen the show grow alongside our own business to the point where it makes sense to have a presence with our own exhibit. We want to make a strong statement and have taken a stand [D12] in the centre of the floorspace.”

RSS recently opened its fifth facility in Hayes, near Heathrow Airport, in addition to headquarters in Bridgend, Wales; and sites in Aylesford, Kent; Templeborough, Rotherham; and Grangemouth, Scotland. Plans are already afoot to open another depot in northwestern England next year, as Hutin targets 10 facilities across the UK.

He said: “As the company has grown and we continue to expand our regional footprints to create a truly national below-the-hook equipment service, increased emphasis has been placed on branding and promotion of the business name. Over the past 12 months or so, we have more readily engaged with our target audiences through content marketing, for example, and taking an exhibition stand at the most relevant trade event to the industry gives more weight, and another focal point, to those endeavours.”

Hutin added: “We were encouraged by the quality of networking discussions that gave purpose to this year’s LiftEx, but we are optimistic that the more central location of Telford will attract an even bigger audience. Our aim is to strike a balance between creating a product-centric, informative exhibit and one with hospitality and relaxed networking at its heart.”

Hutin confirmed that he is in talks with LEEA’s new organising partners about sponsorship opportunities to generate further interest in the exhibition stand and the RSS brand before and during the show.

Continue Reading
#cranesLiftEx 2017Rigging Equipment
686
Share LinkedinTwitterFacebookEmailWhatsApp
Subscribe to our newsletter
Sign up here to get the latest news, updates and special offers delivered directly to your inbox.
You can unsubscribe at any time
Leave a comment

Construction and mining machinery industry getting ready for…