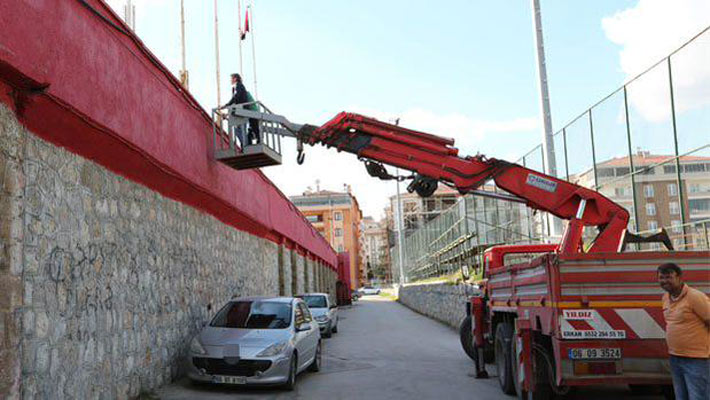 The manager of Turkish third division side Corum Belediyespor has defied a 285-day stadium ban by hiring a crane to watch their crucial promotion playoff match, according to reports in newspaper Hurriyet.

Turkey’s Professional Football Disciplinary Board handed Hamit Isik a nine-and-a-half-month ban and from his club’s matches after angrily confronting a referee during a recent league match and – after crowd disturbances in the same game – the club were ordered to stage their playoff first leg behind closed doors. Isik also received a fine of 33,500 Lira (£8,250) for his sins.

While Isik took up his imaginative new position – no doubt frustrating the authorities in the process – the Corum fans also circumvented their own sanctions by watching the game on a giant screen outside the stadium. After all this fuss, the match against Darica Genclerbirligi finished 0-0 and there’s all to play for in the return leg.

What the inventive manager plans to do next season – particularly if Corum Belediyespor are promoted to Turkey’s 2. Lig – remains unconfirmed, but one thing seems clear: he’s going to need a bigger crane.

Continue Reading
298
Share LinkedinTwitterFacebookEmailWhatsApp
Subscribe to our newsletter
Sign up here to get the latest news, updates and special offers delivered directly to your inbox.
You can unsubscribe at any time
Leave a comment