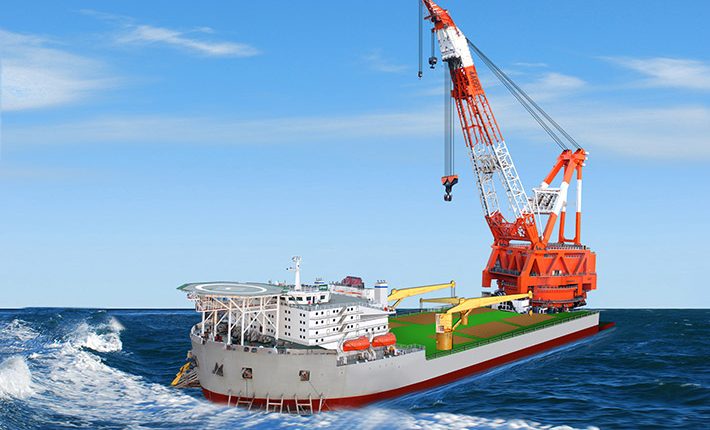 The heavy lift record has officially been broken. The Zhen Hua 30 – a 12,000 tonne crane assembled by Chinese construction company Zhenhua Heavy Industries – set the new world record for lifting back in December 2015, completing a 360-degree spin whilst lifting over 14,500 tonnes (13,200 metric tonnes) during its very first test run.

The Zhen Hua 30 is a state-of-the-art heavy lift vessel designed specifically to assist with deepwater development procedures, and the recent news that it managed to break the heavy lifting world record turned heads all across the globe. Built for a maximum occupancy of 380 persons, the vessel is 297.6 metres long, with a breadth of 58 metres and a depth just shy of 29 metres. Its crane capacity main hoist is officially listed as 12,000t, whilst its auxiliary hoist stands at 1,600t. It also has a transit speed of 12 knots. There’s little denying the impressive look and stance of the Zhen Hua 30, and its initial test run proved that it’s also one of the most advanced and capable lifting vessels in the entire world.

Several prominent government officials from both China and Korea were present during the record-breaking test run for the Zhen Hua 30 in the final month of 2015 – and each of them was able officially certify that the vessel from Chanxiang is in fact now the newest holder of perhaps the most prestigious title in construction.

The Zhen Hua 30 is scheduled to begin its first period of official work in the first quarter of 2016, and has already undergone several trials at sea during these past couple of months. Many individuals in the industry have expressed their excitement at the vessel’s record-breaking test run, and there are high hopes for the Zhen Hua 30 and what it might be able to achieve during the remainder of the year.

Continue Reading
530
Share LinkedinTwitterFacebookEmailWhatsApp
Subscribe to our newsletter
Sign up here to get the latest news, updates and special offers delivered directly to your inbox.
You can unsubscribe at any time
Leave a comment