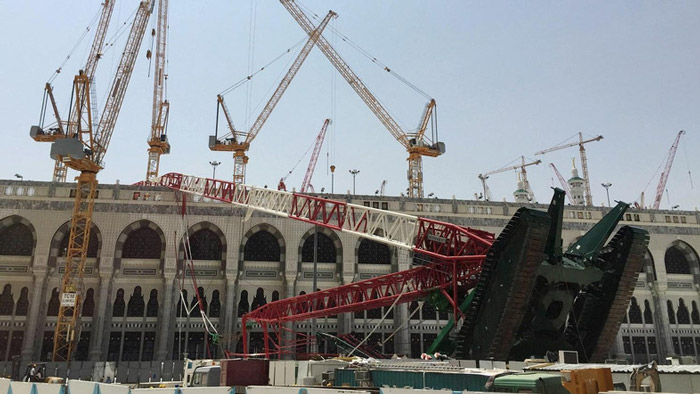 Some 40 people will stand trial before three courts in Jeddah for their confirmed involvement in the crane crash incident in the Grand Mosque in September, local daily Al-Watan reported on Monday quoting informed sources.

The Bureau of Investigation and Public Prosecution (BIP) in Makkah has received back the file on the case which was submitted to the Riyadh office from the BIP’s Jeddah branch for further scrutiny.

The accused includes 30 top officials, directors and technicians in the construction company executing the expansion project of the Grand Mosque (Saudi Binladen Group) and 10 from other government departments.

The General Court will tackle the the issue of diyyah (blood money) and compensations within the private rights while the Administrative Court will look at the violations in the contracts signed between the construction company and a number of ministries and government departments.

The investigating committee has addressed a number of international safety companies and questioned more than 200 people including engineers, managers and members of the boards of directors within its investigations in the case which started immediately after the crash, sources said.

The committee also studied the documents on the operation of the crane, the maintenance contracts and the safety measures in the expansion project of the Grand Mosque.

The committee has obtained data from the manufacturing company, sought the help of international safety experts and obtained reports from the Civil Defense and the Presidency of Meteorology and Environment (PME). BIP investigators have visited the site of the crash several times and studied the pictures from the surveillance cameras.

Sources said the crane should have been in a different position when the strong winds started to blow. They said the investigating committee examined the correspondence between engineers and operating technicians to reach the conclusion that the position of the crane at the time of the crash was inappropriate.

According to the sources, the defendants may face charges of negligence that caused the loss of lives and properties and therefore may have discretionary verdicts in addition to paying compensations under the private right.

Continue Reading
517
Share LinkedinTwitterFacebookEmailWhatsApp
Subscribe to our newsletter
Sign up here to get the latest news, updates and special offers delivered directly to your inbox.
You can unsubscribe at any time
Leave a comment