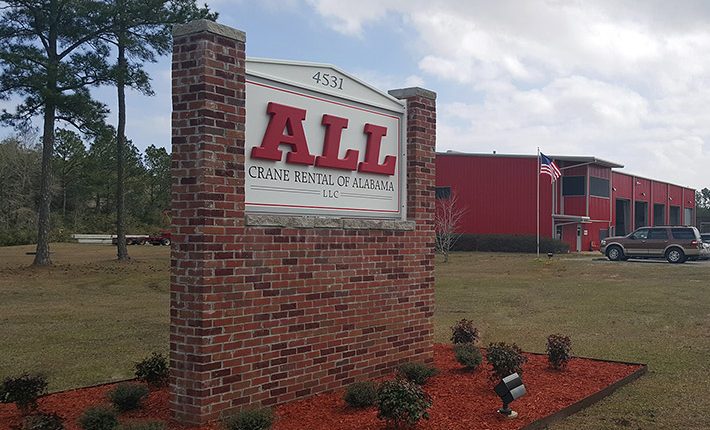 ALL Family Opens Indianapolis Branch, Relocates in Mobile, Ala.

The ALL Family of Companies has opened a branch in Indianapolis, and expanded its Mobile, Ala., location, both to better serve regional customers.

The newest branch of the ALL Family of Companies opened in Indianapolis last month, becoming the company’s 38th North American location, and the fourth branch of ALL’s Central Rent-A-Crane division in Indiana. With branches in Elkhart, Fort Wayne, and Hammond, Ind., the new facility will expand Central Rent-A-Crane’s service area in Central and Southern Indiana.

Kevin Hileman is manager of the new Indianapolis branch, already home to cranes from 40- to 550-ton capacities. Hileman said it’s not just about the cranes on site, but about increasing regional strength. “Our branches form a supply chain [with] our sister Central yards to the North and ALL’s Jeffers branches in western Ohio. All of these yards share equipment based on demand,” he said.

Central Rent-A-Crane’s general manager, Ed Kocsis, said he sees the expansion as a big advantage for customers. “We’ll be able to better respond to the uptick in work requests we’ve received around southern Indiana for the last few years.”

ALL Crane Rental of Alabama, in Mobile, has moved to a larger location just 16 mi. from its previous yard. Extensive work was done on the former warehouse site to make it suitable, including gutting and rebuilding the inside, and modernizing the five large drive-through bays where equipment will be serviced.

“We can now keep a larger inventory of equipment and parts,” said Brian Ledford, general manager. The yard has all new LED lighting, and a storage building and welding shop are planned. The grounds can also be used as a lay-down yard to store equipment that will be sent to jobs west of Mobile, including Louisiana or Texas.

Continue Reading
369
Share LinkedinTwitterFacebookEmailWhatsApp
Subscribe to our newsletter
Sign up here to get the latest news, updates and special offers delivered directly to your inbox.
You can unsubscribe at any time
Leave a comment