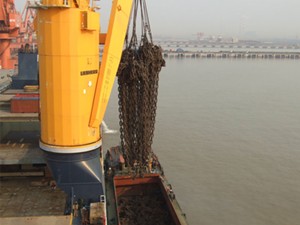 Anchor chains away for Tuscor Lloyds

UK shipping agent and forwarder Tuscor Lloyds has recently completed the movement of a large and heavy consignment of anchor chain from China to the UK North Sea, under the highly pressured requirements of a particular customer.

The cargo was destined for a large deep sea oil rig in the North Sea and comprised of a 1.1 km length of heavy chain weighing 645 tonnes segmented in three bundles of 215 tonnes each.

The cargo moved from Shanghai’s Luojiing terminal and travelled via Antwerp, Belgium finally to Aberdeen, Scotland. Tuscor Lloyds dedicated a team of project managers to the job and provided on-site management in each of the ports to oversee and advise on operations.

At Shanghai, the mother vessel was hired on a part charter basis. Its owners allowed only six hours to complete the job. The vessel arrived in Antwerp a day early.

Tuscor Lloyds once again provided on-site coordination of the transloading of the chain from the mother vessel to the short sea barge in Antwerp.

The barge made it to Aberdeen two days later, and the chains were delivered to the end user well ahead of schedule and in time for the completion of the rig out to sea off the coast of Scotland.

Continue Reading
513
Share LinkedinTwitterFacebookEmailWhatsApp
Subscribe to our newsletter
Sign up here to get the latest news, updates and special offers delivered directly to your inbox.
You can unsubscribe at any time
Leave a comment