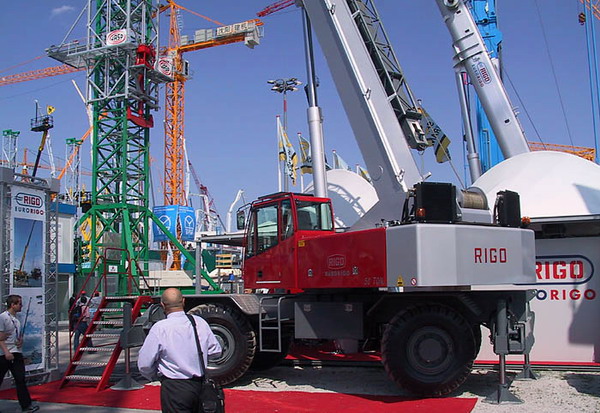 Autogru Rigo few years ago introduced on the crane market a 50 metric tons capacity rough-terrain crane, called RT 500, with 35 meter boom length. This mobile crane acquired many modern technical features from its predecessors either in the rough-terrain and in the all-terrain range.
The RT 500 utilizes hydrostatic transmission, like all Rigo rough-terrain crane models.
In fact, Rigo was the first manufacturer in the world to introduce – in 1987 – this type of transmission on rough-terrain cranes.
The advantages of this transmission are clear and easy to understand: the carrier of the machine becomes a simple box structure with internal steel stiffening ribs.
This constitutes an extremely rigid element which is an ideal torsion resistant structure, lighter and stronger than traditional carriers.

The RT 500 GVW is just above 32 tons! This carrier enables the crane to have a real 360° lifting chart, due to the components location on the superstructure which also simplify maintenance operations.
In fact, the diesel engine and hydraulic pumps are all located in the superstructure, where they can be easily serviced when needed. In case of machine malfunction, when there is a problem in the diesel engine or in the transmission, the down-time of replacing a component such as hydraulic pump or motor is much shorter of that if the torque converter or pumps had to be dismantled and then put it back on. It is easy to imagine the large space around the engine and other components that are located on the upper part, where they can be easily reached.
On the other hand, on traditional rough-terrain cranes, the transmission (torque converter) is coupled directly to the diesel engine; both components are located on the rear side of the carrier, confined in a tight area, not easily accessible. It is not a case that also modern wheel-loaders, that a decade ago used torque converters, these days adopt hydrostatic transmission.
Another technical feature of the RT 500, is its boom proportional telescoping system. The operator can select to extend the boom section according to 2 main programs: all sections extended proportionally, whenever there is need to operate with relatively small loads at long radii; or only the first 2 sections extended proportionally, when he needs to lift heavier loads at medium radii.
This means that the operator can use the ideal boom configuration according to the load he is lifting, assisted by a stronger load chart than other traditional boom telescopic systems.

Continue Reading
featured
758
Share LinkedinTwitterFacebookEmailWhatsApp
Subscribe to our newsletter
Sign up here to get the latest news, updates and special offers delivered directly to your inbox.
You can unsubscribe at any time
Leave a comment