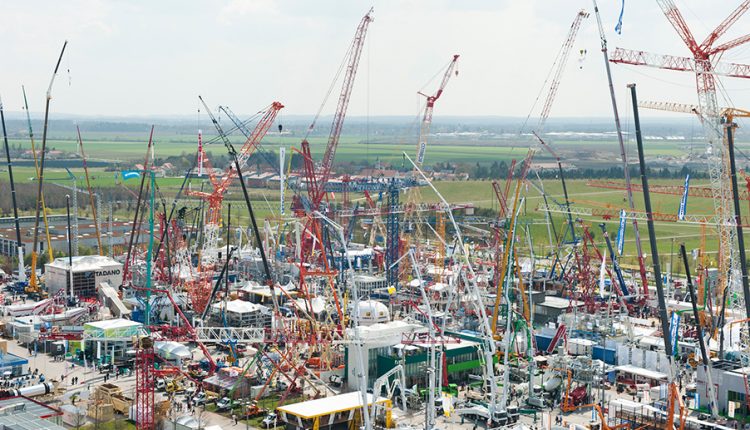 bauma 2013: Platform for the international building and construction industry

The growth in the construction market worldwide is giving rise to a surge in demand for concrete products, concrete pipes and shafts as well as precast components. This demand is in turn boosting developments among the manufacturers of the machinery and plant that is used to produce these components. At bauma in Munich, between April 15 and 21, 2013, a whole range of new products made of concrete and other materials will be on show at the booths of systems suppliers and components specialists, across the spectrum from newcomers to market leaders.

Sales expected to rise by five percent
The German Engineering Federation (VDMA – Verband Deutscher Maschinen- und Anlagenbau) is expecting concrete-block-making machines and systems for the manufacture of precast concrete components to be a growth segment in the construction and building materials machinery sector this year. For 2012, the federation is predicting five-percent growth in sales in both building materials machinery and construction machinery.

Backlog of demand in the emerging markets
On the international front, too, there is movement in the market. A recent survey of selected German building materials machinery manufacturers, carried out by the Weimar-based Institute for Applied Research in Building (IAB – Institut für Angewandte Bauforschung), revealed that sales growth is expected to come in particular in the markets abroad. Demand was especially strong, it noted, in the emerging markets – China, India, certain countries in Eastern Europe and some of the former Soviet Republics. The report identified strong interest in turnkey production systems where manufacturing expertise and services were also included in the package.

Precast concrete components for India and Singapore
Vollert Anlagenbau of Weinsberg reports that it has delivered India’s first modern pallet circuit system. It is in use by the construction firm Precast India Infrastructures in its production plant in Pune, Western India, outputting up to 120 square meters of precast concrete walls per hour, as well as precast concrete floors and hollow-core slabs for the subcontinent’s booming building industry.
Another current example of technology “Made in Germany” installed abroad is Singapore’s first fully automated precast concrete plant, which went into operation in May 2012. The system caters to the high demand from the residential and industrial building sector in the rapidly expanding economy of this island state. Key components in the system have been delivered by Vollert Anlagenbau as well as Weckenmann Anlagentechnik of Dormettingen.

More aerated concrete in the Ukraine
One exemplary project in the region of the former Soviet Republics is the expansion of an aerated concrete factory in the Ukraine, completed in March this year. Systems manufacturer Masa of Porta Westfalica has increased daily output at the factory in Dnepropetrovsk from 1,000 cubic meters previously, to 1,400.

Good prospects for wetcast concrete
On the subject of new technology, the IAB survey reveals a general rise in market interest in the wetcast production process. Here wet concrete is poured into flexible special moulds which have patterned inner faces. This pattern is retained on the surface of the concrete after curing. The technique enables companies to produce high-quality products with an individual look.

About bauma
bauma, the International Trade Fair for Construction Machinery, Building Material Machines, Mining Machines, Construction Vehicles and Construction Equipment, takes place from 15 to 21 April 2013 at the New Munich Trade Fair Centre. The last bauma, in 2010, attracted 3,256 exhibitors from 53 countries, and over 420,000 visitors from more than 200 nations. Covering a total of 555,000 square metres of exhibition space, bauma is the largest trade show in the world. The statistics for the fair are independently audited by Ernst & Young AG on behalf of the Gesellschaft zur Freiwilligen Kontrolle von Messe- und Ausstellungszahlen (FKM), a society for the voluntary control of fair and exhibition statistics.

Construction machinery trade fairs of Messe München International (MMI)
Organising trade fairs for the international construction machinery sector is a core competence of Messe München International. In addition to the world´s leading trade fair, bauma in Munich, MMI also organises the brand events bauma China in Shanghai and bC India in Mumbai. Outside Germany, the Group engages in activities via its subsidiaries MMI Asia and IMAG, or as a cooperation partner in regional events for the sector.

About Messe München International (MMI)
Messe München International (MMI) is one of the world´s leading trade-fair companies. It organises around 40 trade fairs for capital and consumer goods, and key high-tech industries. Each year over 30,000 exhibitors from more than 100 countries, and over two million visitors from more than 200 countries take part in the events in Munich. In addition, MMI organises trade fairs in Asia, Russia, the Middle East and South America. With six subsidiaries abroad – in Europe and in Asia – and 64 foreign representatives actively serving over 90 countries, MMI has a worldwide business network. Environmental protection and sustainability are key priorities in all MMI´s operations, at home and abroad.

Continue Reading
featured
561
Share LinkedinTwitterFacebookEmailWhatsApp
Subscribe to our newsletter
Sign up here to get the latest news, updates and special offers delivered directly to your inbox.
You can unsubscribe at any time
Leave a comment

Construction and mining machinery industry getting ready for…