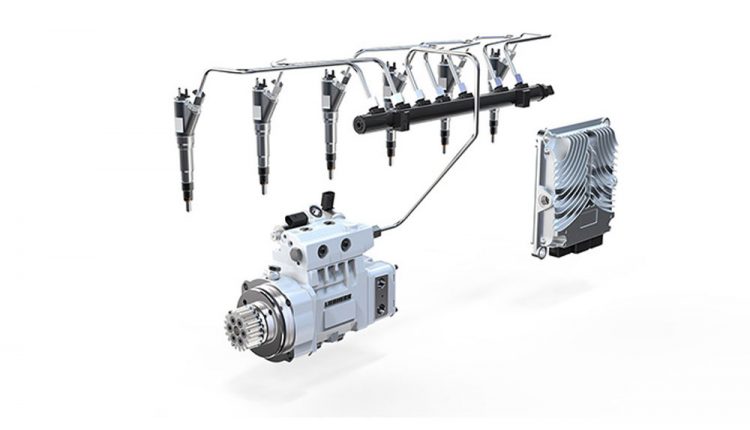 At Bauma China 2016, Liebherr is presenting a new installation version of its pioneering common rail injection system 11.2 as well as a new engine control unit. Both in-house developed and manufactured innovations are planned for series production in the second half of 2016. The whole system is designed to meet the common off-road emissions standards as well as on-road guidelines EURO V and EURO VI.

New top feed installation version
At Bauma China 2016, Liebherr presents the second generation of the common rail system 11.2 as a new installation version with top feed injector. Previously, Liebherr offered the 11.2 system with a side feed injector only (through high-pressure connectors). In the top feed version, the connections for the pressure lines are located at the top of the injectors, which makes other rail and pressure line positioning options possible. At the same time, an enlarged nozzle variant has been developed with a maximum nozzle flow rate of 2,200 ml/ 30 seconds, thanks only to the increase of the nozzle diameter from 7 mm to 9 mm.

With this additional version of the 11.2 system, Liebherr offers its customers more flexibility with regard to system integration. The solution can be adapted more specifically to the requirements. Depending on the engine geometry and available installation space, the side feed or top feed version can be selected. The serial production is planned in the second half of 2016. The system is currently undergoing final field tests.

As with the first generation of the common rail system 11.2, the new generation also covers a performance range of 120 to about 800 kW, in exceptional cases even up to 1,000 kW. The 2-cylinder inline pump with oil-lubricated crankshaft delivers up to 300 litres of fuel per hour at 2,200 bar working pressure. The injectors supply a maximum full load injection volume of 300 mg with steady multi-point injection. The nozzles can be adapted to the required engine performance from a broad flow rate range. The flow rate range in this case is between 600 and 2,200 ml/ 30 seconds. This broad spectrum makes it suitable for high performance engines as well.

Advantages of further-developed Liebherr system
The advantages of the first generation are kept and further strengthened for the second generation of the 11.2 common rail system. The Liebherr injector is, therefore, still free of permanent leakage. As a result, the amount of fuel returned to the tank and the thermal energy associated with it are reduced considerably. Consequently, the need for or scope of an additional cooling system is minimised. The remaining switch leakage is less than 40 ml/ min under full load. The 3-way control valve enables adaptation of the needle opening speed to each individual engine and, at the same time, realises an extremely fast closing process of the injector needle. This design, therefore, helps to achieve a good balance between the best possible combustion and the lowest possible consumption.

To avoid flow losses, the injector does not have a throttle point between the high-pressure connection and the injector needle seat. With an additional, relatively large fuel reservoir volume (mini-rail) in the injector, the pressure loss is minimised from the inlet to the injector seat during injection. By combining these constructive measures, it was possible to reduce the mean drive performance requirement of the high-pressure pump considerably.

The revised high-pressure pump is still an “oil-lubricated” device and not a fuel-lubricated one. This makes the service life of the pump independent of the fuel quality. Thanks to the optimal lubrication, the mounting is very sturdy and allows relatively high system pressures to be achieved even at low speeds. The design of the pressurisation pump allows for an inner rotor (G-rotor). It is distinguished by high suction, particularly in the start-up phase. The main delivery pump with eccentric drive contributes towards the excellent smooth running properties.

New ECU3 control unit
The engine control unit ECU3 has been completely revised for the new generation of 11.2 common rail systems. As an all-in-one system, it comprises all control functions, not only for the engine and the common rail system but also for exhaust gas aftertreatment. As such, it ensures compliance with the common off-road emissions guideline Stage IV and Tier 4 final as well as the on-road regulations Euro V and ISO Euro VI. Besides the ECE R10 regulation, the Liebherr control unit fulfils the specifications of many other relevant standards, among them ISO 26262 and ISO 13849 for functional safety.

The ECU3 control unit features freely programmable I/O customer interfaces and supports internationally common communication protocols like J1939, XCP and UDS. Thanks to the optimised cooling concept, air-cooling is adequate for most applications. For higher temperatures, fuel cooling is possible for the housing. The ECU3 system is suitable for the toughest of environmental conditions and has a long service life.

Development of common rail injection systems at Liebherr
At the beginning of 2013, Liebherr presented the first version of its in-house developed common rail injection system, which at that time had already proven its worth for a year in its own engines of emissions stages IIIB and Tier 4i in series production. Since then, the range of products in the area of injection systems has been further developed and enhanced to meet the requirements of emissions guidelines Stage IV and Tier 4f. By mid-2014, a further step was taken in the market with the launch of the common rail injection system 11.5 for engines with up to 6-litre displacement per cylinder and an output of 240 kW per cylinder. While the 11.2 system is also used in Liebherr engines, the 11.5 system was designed mainly for customers outside the Liebherr Group. The serial production of the 11.5 system is planned in the beginning of 2017.

Continue Reading
Liebherr-Werk Biberach GmbH
577
Share LinkedinTwitterFacebookEmailWhatsApp
Subscribe to our newsletter
Sign up here to get the latest news, updates and special offers delivered directly to your inbox.
You can unsubscribe at any time
Leave a comment