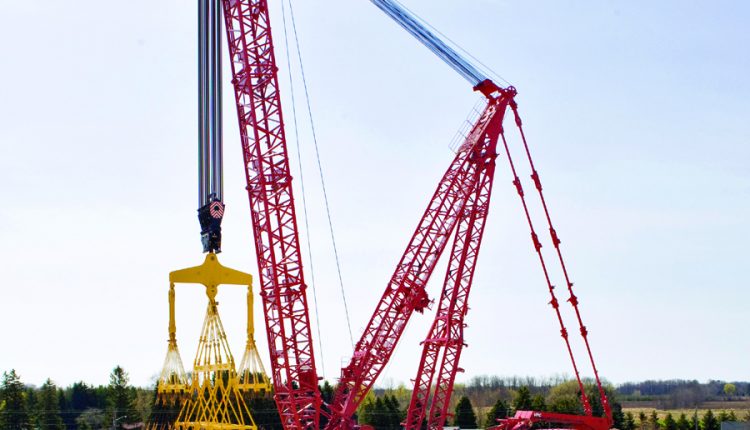 South Korean lifting company Chunjo Construction Co., has been putting its Manitowoc 31000 to great use over the last few years, performing superlifts on a variety of large-scale projects across its home country. A recent project in Vietnam marks the first time the company has transported the crane outside of South Korea.

Chunjo transported the 2,300 t crawler crane to Vietnam, where it was used to help construct a petrochemical refinery in the Thanh Hoa Province. A consortium of Vietnamese and Japanese companies oversaw the plant’s construction, during which the crane erected a variety of heavy process equipment.

Though the 31000 is a large crane, Chunjo sent it to Vietnam because it is the easiest in its class to transport. The crane’s Variable Position Counterweight (VPC) enables it to use far less counterweight than cranes offering similar capacities. This not only cuts transportation costs, it also means that less ground preparation is needed on the job site, further saving time and money for the company.

Jong Seoung Park, general manager of Manitowoc Cranes in Korea, said that customers in Asia are realizing the benefits of the 31000 and its VPC.
“Though it is a challenge to transport such a large crane to another country, customers still wish to have the 31000 on their job sites because it saves so much money during shipping, ground preparation and erection,” he said. “Also, the crane is gaining a reputation for excellent performance. Chunjo prefers the crane for these large lifts and the contractors are very pleased with the crane, too, because it reduces costs and completes their projects with greater efficiency.”

On the job site in Vietnam, the 31000 was set up with steel mats, as opposed to traditional timber mats, which further lowered the ground-bearing pressure from 70 t per sq. m. to only 30 t per sq. m. This saved additional preparation costs on the project.
The 31000 lifted xylene columns, at weights up to 983 t. It was rigged with 90 m of boom and only 964.11 t of counterweight. The crane’s compact footprint, enabled by the VPC, allowed it to fit into narrow working quarters to complete the lifts. It arrived to the job site in August, working steadily through September.

“Chunjo and all of the companies comprising the consortium were very pleased with the performance of the Manitowoc 31000 on this project,” Park said. “This was a great test to see how the crane would fare in being shipped to a country outside of Korea, and all of the companies agreed it exceeded expectations. The crane not only completed the challenging lifts, it reduced costs and increased efficiency.”

Chunjo’s work schedule for the 31000 now extends through the whole of 2016 as the popularity of the crane continues to grow. The crane is also changing the face of engineering in industrial facilities in South Korea. For example at one petrochemical facility the crane has just positioned a 98 m tower in a single lift. Previously all other towers at this facility were assembled using a combination of heavy lifting and on-site fabrication, but the 31000 now represents a more efficient option for this work. And in the coming months the 31000 will lift the first modules at an industrial facility, where the components have been designed exactly to match the lifting capabilities this unique crane offers.

Continue Reading
567
Share LinkedinTwitterFacebookEmailWhatsApp
Subscribe to our newsletter
Sign up here to get the latest news, updates and special offers delivered directly to your inbox.
You can unsubscribe at any time
Leave a comment