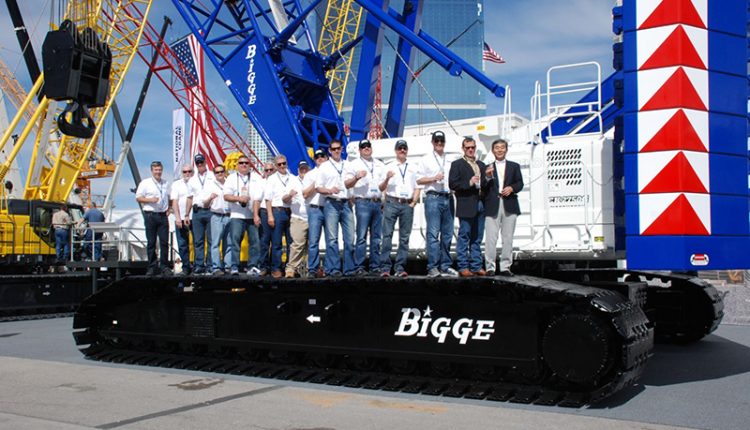 Some of the most celebrated moments at any big trade show are when a contractor or dealer takes ownership of a new piece of equipment. At ConExpo, a number of major crane purchases were made and handed over to their new owners. Among these were three Kobelco G-Series crawler cranes bought by Dozier Crane, Bigge Crane & Rigging, and RMS Cranes.

With more than 30 Kobelco crawler cranes in its rental fleet, Dozier Crane owns the largest number of Kobelco cranes in the United States—and the company was poised to add another at ConExpo. Sold by Jamie Cowin of Cowin Equipment Co., Kobelco’s dealer for Alabama, Georgia, and the Florida Panhandle, Dozier Crane took delivery of a CK1100G at the show. Dozier Cook, founder of the Pooler, Ga.-based crane rental and sales company, spoke highly of Kobelco Cranes North America’s products and service just minutes before popping the cork on the champagne to celebrate the event.

“Kobelco gives us great service,” Cook said. “We have cranes all over the country, and we use Kobelco because there are almost zero problems.”

The CK1100G has a maximum lifting capacity of 110 tons. Its boom length spans from 40 to 200 ft., and its fixed jib offers a maximum lifting capacity of 24,000 lbs. The maximum combined length of the boom and fixed jib is 250 ft. The crawler’s engine is a 285-hp, 2100-rpm HINO four-cycle, water-cooled, vertical inline, direct-injection, turbo-charged model with an intercooler. The crawler’s fuel tank holds 106 gallons.

Its main and auxiliary winches have a maximum line speed of 390 fpm, and a rated single-line line pull of 46,800 lb. ft. It travels at 1.07 mph, has an operating weight of 198,500 lbs., transport weight of 95,200 lbs., and 69,000 lbs. of counterweight.
Bigge Crane & Rigging is Kobelco Cranes North America’s dealer in California, Oregon, and Washington, and it also buys Kobelco crawlers for its rental fleet. “This is a true relationship,” said Weston Settlemier, president and CEO of Bigge Crane & Rigging.

At ConExpo, the crane and rigging enterprise took ownership of a CK2750G crawler crane, which it has designated for its rental fleet. The newest Kobelco CK2750G joins a family of 25 other Kobelco crawlers in Bigge’s fleet that range from 80 to 275 tons in capacity. The CK2750G is expected to first be operated on a project in Dallas, Texas.

The 275-ton crawler was purchased with a full boom of 300 ft. plus a 100-ft. fixed jib and luffing jib. Other notable features on the CK2750G include main and auxiliary winches with a maximum line speed of 361 fpm and a rated single-line pull of 56,700 lb. ft.

Crawler for the Mountains
“Kobelco crawlers, because of their safety, technology, and ease-of-use, are in high demand with our customers,” said Settlemier. “Kobelco quality is as good as it gets, and its continuous improvement ensures a long lasting and ever growing relationship.”

Headquartered in Denver, Colo., with offices in Colorado Springs and Pueblo, RMS Cranes is a full-service crane rental company that serves Colorado’s Front Range construction and industrial markets with its fleet of mobile and tower cranes. While its expertise is in crane rental, Cody Gilliland, president, said the company has been a dealer for Kobelco Cranes North America since 2005. “We’re committed to the product line,” he said.

RMS has tapped its new CK1600G crawler crane, which was handed over at ConExpo, for its rental business. Gilliland confirmed there are jobs lined up for this crane after the show.

With its singular focus on crawler cranes, Kobelco Cranes North America often has relationships with its owners that go beyond traditional OEM-customer relationship. Conventional distribution channels tend to keep dealers and crane rental customers separate. A handful of Kobelco’s crane rental and service customers like RMS Cranes and Bigge Crane & Rigging are also its dealers, which may be unusual for the crawler crane world.

Kobelco is diligent in its research on dealer prospects to ensure a successful relationship. “We’re selective in a region, and look at the ownership’s involvement in everyday business, financial stability, and commitment to supporting the products they represent for us,” said Jack Fendrick, president of Kobelco Cranes North America.

How the company is perceived in its home market, its motivation for becoming a dealer, and its capabilities for servicing equipment are questions that Fendrick poses when exploring dual dealer and crane rental customer opportunities. “Because of their experience in rental, many customers look to them as experts,” he said. “They buy cranes, use them in their fleet, and understand erection, assembly/disassembly, uptime, and how to prioritize.” When all the pieces fit together, Kobelco not only has a solid customer but also an expert sales team.

“We look at customer/dealer/manufacturer as a triangular relationship rather than a straight line,” Fendrick said. “That proves to be more effective.”

Continue Reading
Kobelco
400
Share LinkedinTwitterFacebookEmailWhatsApp
Subscribe to our newsletter
Sign up here to get the latest news, updates and special offers delivered directly to your inbox.
You can unsubscribe at any time
Leave a comment