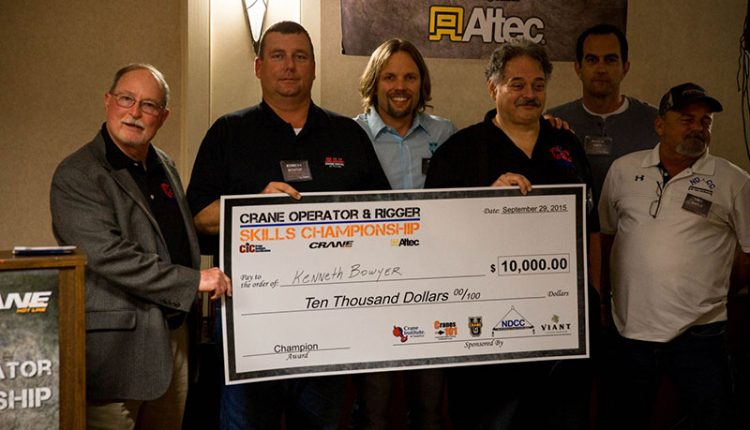 Fourteen operators from around the country competed in the 2015 Crane Operator & Rigger Championship, but only one took home the $10,000 grand prize. Kenneth Bowyer of ALL Erection and Crane Rental, Tampa, Fla., can call himself a two-time winner of the competition, after defending the championship title he received last year in Las Vegas. First runner-up was Eric Gaut of CraneWorks, Birmingham, Ala., who received a $2,000 prize, and second runner-up was Jose Villanueva of Bay Ltd., Corpus Christi, Texas, who took home a $1,000 prize.

Operators competing in the event, which took place at ICUEE in Louisville, Ky., were challenged with operating a 45-ton Altec AC45-127S boom truck with a 100-ft.-long boom in a tight course that consisted of barrel dunks with the overhaul ball and a barrel slalom with a 55-gallon drum load. On top of that, the weather became a factor for the operators, with rain of various intensity falling through the day affecting the operator’s visibility. The course, which was developed by Crane Institute Certification, was judged by CIC practical examiner.

In addition to the practical portion of the competition, each operator had to successfully complete a rigging challenge designed by Columbus McKinnon Corp.

Look for the complete review of the competition in the December issue of Crane & Rigging Hot Line. The competition couldn’t have taken place without the regional competition and national championship sponsors.

Continue Reading
631
Share LinkedinTwitterFacebookEmailWhatsApp
Subscribe to our newsletter
Sign up here to get the latest news, updates and special offers delivered directly to your inbox.
You can unsubscribe at any time
Leave a comment