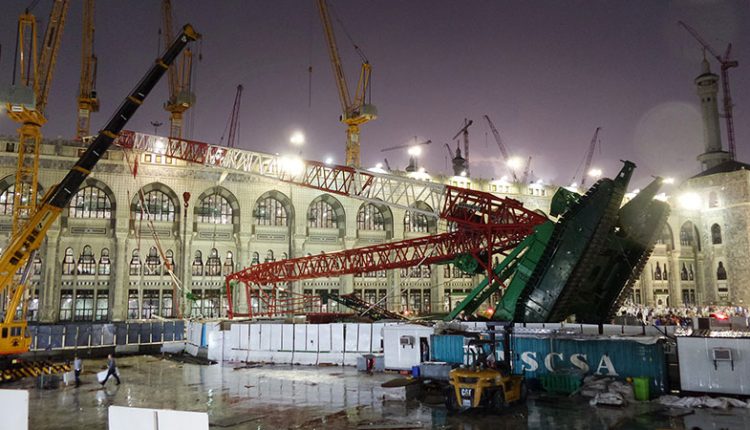 Crane Safety when Working in the Wind

On 11 September 2015, a crawler crane toppled over onto the Masjid al-Haram, the Grand Mosque in Mecca, Saudi Arabia. 111 people were killed and 394 injured.

Operating cranes on a particularly windy day can be potentially hazardous. While a breeze may not be threatening, gushing winds can topple loads and pose a threat to the workers.

No wonder, many cranes these days use devices such as the anemometer that gives an accurate and real time description of the wind speed and the wind pressure existent on the crane and the load. This gives the crane operator sufficient time to respond and prevent any mishap from occurring. Boom length and angle and the load carried can be adversely affected by the wind and thus need to be measured accurately.

Understanding the phenomena
Wind speeds beyond a certain limit make the crane mechanism unstable. Generally, crane operators should refrain from operating the cranes if the wind speed goes beyond 10-30 mph (depending on the crane model).
Strong winds also create strong wind pressure, which affects the crane body and the load carried by the crane. Also, other important portions of the crane, which winds can affect, are the upper part (tip), lower part and the sides of the crane. This is the reason various crane operators either employ wind safety devices or keep a track of the weather at all times to ensure that wind does not cause accidents. An anemometer can the best device to measure wind speed with respect to the crane as it measures unobstructed wind speed and is more efficient than local weather reports or hand-held anemometers.

Ways to obtain wind protection
There are various ways in which one can protect their crane from strong, disastrous winds.

1. Anemometer
Invented back in 1845, an anemometer looks like a device with cup-like objects (usually 3 to 4) revolving around it. It has sensors that accurately measure the wind speed. There are also windmill style and acoustic anemometers – however, crane operators don’t usually use these today. Modern day anemometers are wireless and communicate details regarding the wind and its affects to the operators in real time.

2. Local Weather News Reports
Local weather news reports can also accurately describe the changing wind speeds throughout the day. Your smart phone can tell the wind speed of the location you are in as well. However, considering that a lot of construction activity involving cranes goes around in rural areas where wind speeds may not be measured accurately, this method is not very reliable.

3. Hand-Held Anemometers
Hand-held anemometers are hand-held devices that can be held in order to determine the wind speed. However, it has several limitations and is not very frequently used. One of such limitations is that it cannot be hoisted to a great height unless the person holding it is loaded to such a height. In effect, accurate determination of wind is not possible with it.
While a little bit of rain and wind isn’t harmful, crane operators need to know when they should stop working. After all, the repercussions can be great and it is best to know when to stop work. Working in windy conditions isn’t safe as it might lead to a number of problems, including the load falling off, which can cause injuries to anyone standing beneath it.

Continue Reading
4,523
Share LinkedinTwitterFacebookEmailWhatsApp
Subscribe to our newsletter
Sign up here to get the latest news, updates and special offers delivered directly to your inbox.
You can unsubscribe at any time
Leave a comment