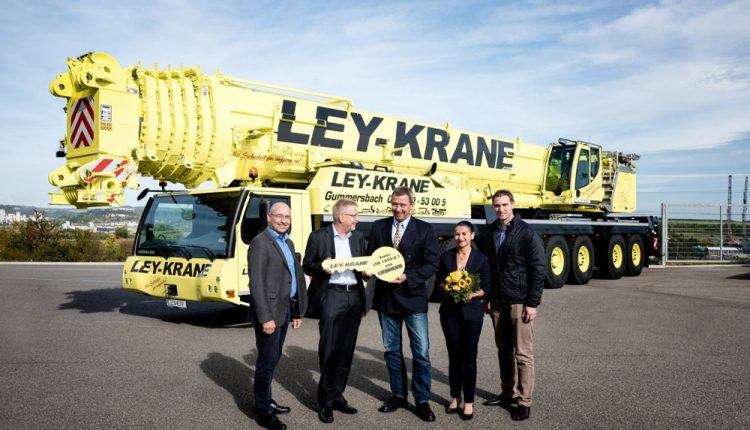 Ley-Krane adds the new 450-tonne crane to its fleet.
Ley-Krane GmbH und Co. KG takes delivery of the first LTM 1450-8.1.
Great economy and simple set-up were important criteria behind the purchase.
The LTM 1450-8.1 travels with its complete 85-metre telescopic boom on public roads.

Liebherr delivered the first LTM 1450-8.1 at the start of October. It went to Gummersbach-based crane contractor Ley-Krane GmbH und Co. KG, which has added the new 450-tonne mobile crane to its fleet. Liebherr unveiled the LTM 1450-8.1 with a completely new concept for 8-axle mobile cranes at the Bauma last year, with great economy and simple set-up on site being the main priorities. This means that the new 8-axle crane is capable of travelling on public roads with a 12-tonne axle load including its complete 85-metre telescopic boom and all supports. This enables it to be prepared for use quickly once it reaches the site.

Company proprietor Markus Ley, who travelled with his wife to take delivery of the new crane at the Liebherr Plant in Ehingen, said: “We had been looking for a powerful fast-erecting crane which could be set up easily with few personnel for some considerable time. When we heard about the LTM 1450-8.1, we quickly made a decision to buy the crane. Its long boom enables the LTM 1450-8.1 to reach great heights quickly and easily.”

The company’s previous largest crane was a Liebherr 6-axle model. Ley is planning to use its new 450-tonne crane for repairing wind turbines and as an auxiliary crane for erecting the latest generation of wind turbines, among other things. Ley said: “We are also expecting a great deal of work for the LTM 1450-8.1 from bridge replacements on autobahns. 38 new bridges are planned on the A45 autobahn alone. The old ones must be removed and the new bridges then installed.”

The new LTM 1450-8.1 is also ideal for assembling prefabricated concrete parts and relocating machines. Ley explained: “Machines today are often hoisted over the roof of the building that houses them. That requires a powerful crane with a long boom.” Ley also appreciates the flexibility of the new Liebherr 450-tonne crane in terms of road licences. “We bought the “removable telescopic boom” option. That means that in addition to the 96-tonne licence we also have one for a gross weight of less than 60 tonnes. That makes things much easier for us for travelling on public roads.”

The new 450-tonne crane from Liebherr features easy handling and modern mobile crane technology. The new crane also makes it possible to work with a variable ballast radius. The VarioBallast® enables the ballast radius to be reduced with infinite adjustment from 7 metres to 5 metres using a simple hydraulic system, a feature which is very practical on constricted sites.

Continue Reading
Liebherr-Werk Biberach GmbH
893
Share LinkedinTwitterFacebookEmailWhatsApp
Subscribe to our newsletter
Sign up here to get the latest news, updates and special offers delivered directly to your inbox.
You can unsubscribe at any time
Leave a comment