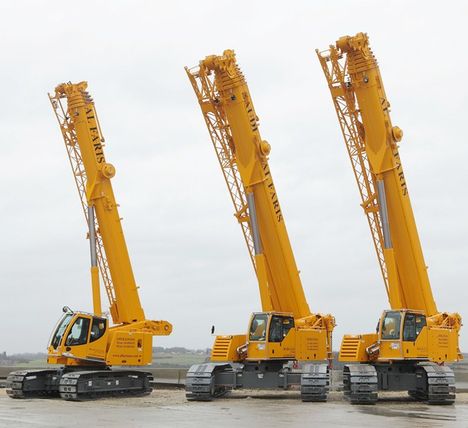 Dubai-based Al Faris Equipment Rentals has ordered 47 Liebherr mobile cranes worth more than €40 million. The first units have already been delivered and and the order is due to be completed at the end of 2012.

Liebherr says another major order is expected early next year for delivery in 2013. The cranes will be a significant addition to the Al Faris fleet which already includes 180 Liebherr cranes.

It also includes a considerable number of LTR 1060 and LTR 1100 telescopic crawler cranes. Al Faris opted for these because it says “on long-term construction sites they are considerably more efficient in operation than comparable off-road cranes”.

High residual values, the number of Liebherr after-sales service facilities in the region and excellent parts availability were the deciding factors to go wiht Liebherr, according to Al Faris managing director Hillary Pinto.

The Al Faris group was established in 1992, and is now one of the largest crane rental and transport companies in the Middle East. The company employs around 1,800 at four bases in the UAE and Saudi Arabia. The company concentrates on the petrochemical and oil and gas industry. The rental of mobile cranes is the core business, with an emphasis on providing an all-round service, including lift planning transport, set up and dismantling.

Continue Reading
featuredLiebherr-Werk Biberach GmbH
587
Share LinkedinTwitterFacebookEmailWhatsApp
Subscribe to our newsletter
Sign up here to get the latest news, updates and special offers delivered directly to your inbox.
You can unsubscribe at any time
Leave a comment