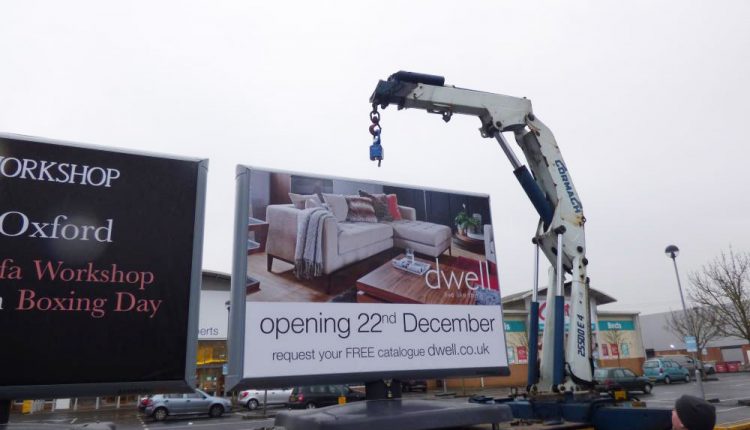 The Trotter billboard concept was devised in Holland; the company uses the patented Elebia evo5 hook equipped with a magnet that attracts and positions slings and other rigging gear. Each mobile billboard is fitted with a ring that enables safe and efficient lifting operation.

Hugo Southwell, sales director for Trotter UK, said: “The Elebia hook has been integral to the quick and safe installation of mobile billboards at a myriad of locations across Europe and it will be equally important to our strategy as we grow a franchise also based on safety and efficiency.”

Trotter UK has only needed a single evo5 to dat, but Southwell anticipates that it will have 120 billboards in stock by the end of the year so additional units may be needed.

He said: “We have four trucks on the fleet but currently only one hook, so we will require more hooks as business grows to the point where we need more than one vehicle on the road at once. Our transport partner has also noted the safety and productivity benefits of the hook so we are effectively pioneering the system in the highways, events, retail and other UK sectors.”

Trotter mobile billboards come in three sizes with the largest offering 2×8 square metres of advertising space, weighing 2.2 tonnes. Delivery and installation of a unit takes less than 20 minutes, largely owing to the employment of the Elebia hook. The billboards are placed on the ground not into it, and units can be in place for a one-day event or throughout a season or up to a 12-month period, depending on customer requirements.

Southwell concluded: “The hook might be used for a single drop or multiple installations, but in every case it saves a tremendous amount of time and eliminates the requirement for additional rigging equipment and the need for personnel to work at height.”

Continue Reading
312
Share LinkedinTwitterFacebookEmailWhatsApp
Subscribe to our newsletter
Sign up here to get the latest news, updates and special offers delivered directly to your inbox.
You can unsubscribe at any time
Leave a comment