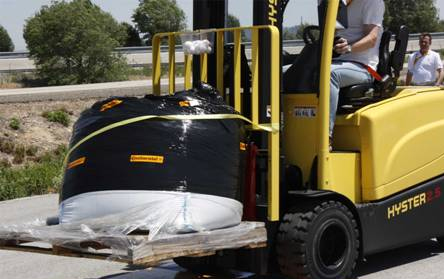 Competitor comparison – experiencing the difference at first hand
At Conti Live Action 2012 about 200 vehicle manufacturers, tyre dealers and fleet managers spent two days putting Continental industrial tyres through a series of tests benchmarking them against competitor products. The venue was the INTA (Spanish Institute for Aerospace Technology) test track in Viemes, near Madrid. “We wanted them not only to experience the performance of the tyres but also to show our guests the lower total cost of ownership of Continental industrial tyres”, said David Alonso, Spanish Director of Marketing and Sales.

The organizers had put together a series of tests in which different tyres could be tested on the same vehicles and under the same conditions The vehicles from Still, Jungheinrich, Caterpillar, Linde, and Hyster were fitted with Continental tyres and those from competitors. In the tests, the drivers quickly noticed the differences in vibration suspension characteristics and rolling resistance. In one case ContiRV20 radial tyres were compared to a competitors tyre on a tractor and the competitors tyres showed a very different wear pattern – a clear indication of the superior durability of the Continental tyre.

Less rolling resistance less energy
Continental tyres also came out on top in rolling resistance: The vehicle with Continental CSEasy SC20 tyres rolled from a ramp about 20 meters further than the one on competitors tyres. In a continuous operation, the temperature of the Continental tyre also remained lower than the competitor also an indication of lower energy usage. In one test-run a competitors tyre overheated and and disintegrated. Also as the CSEasy SC20 uses less energy the vehicle can travel further in a given time.

Higher stability and more comfort
A lift truck fitted with Continental SC20 was very stable, but when the same truck was fitted with competitors tyres it tilted considerably when lifting a load In another experiment a vehicle was driven with eggs on board over uneven ground. When fitted with Continental SC20 tyres the vehicle ran smoothly with less vibration and a lot less eggs were broken than when running on competitor tyres.

“We even convinced our more critical customers with the outstanding performance of our tyres ,” marketing director Veronica Lucas resumed. “The Conti Live Action showed the real benefits of Continental industrial tyres in everyday work and how these contribute to lower operating costs “

Continue Reading
468
Share LinkedinTwitterFacebookEmailWhatsApp
Subscribe to our newsletter
Sign up here to get the latest news, updates and special offers delivered directly to your inbox.
You can unsubscribe at any time
Leave a comment