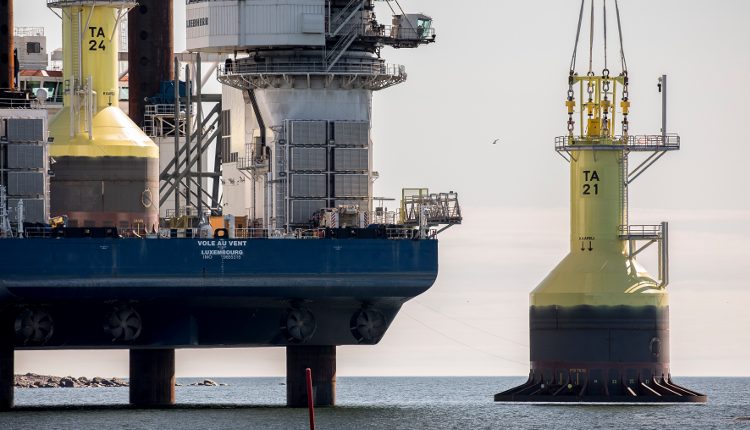 A Synchoist load positioning system, from Enerpac Heavy Lifting Technology, has been used by Finnish wind power production company, Suomen Hyötytuuli Oy, for the installation of gravity base foundations at the Tahkoluoto Offshore Wind Farm, Pori, Finland. The Tahkoluoto Wind Farm is the world’s first offshore windfarm designed for operation in ice conditions.

Operated by Suomen Hyötytuuli Oy, the Tahkoluoto Offshore Wind Farm includes 10 offshore wind turbines, each with a capacity of 4.2 MW. Following preparation of the seabed to provide a level surface, the hollow gravity base foundations weighing up to 500 tonnes were installed. During lowering through the splash-zone and positioning on the seabed, the Synchoist system was used below the crane hook to ensure the foundation remained as close to vertical as possible. This prevented damage to the levelled seabed surface and facilitated the subsequent addition of the turbine tower.

To handle the foundation lift without distorting the transition piece flange used to connect the turbine tower, an X-frame lifting tool was developed that connected to the flange. It comprised a lifting frame with four SyncHoist, self-contained PLC-controlled, double acting, push-pull hydraulic cylinders at each corner, and diesel hydraulic powerpack with battery back-up.

High precision manoeuvring of the foundation by the Synchoist system was performed wirelessly by an operator working alongside the foundation installation team. This allowed the operator to lift and lower each cylinder independently to balance, tilt and position the load in response to feedback from four levelling sensors on the foundation.

“We wanted the X-frame lifting tool to be completely self-contained without any hoses or wires connected to the vessel. This way we had maximum flexibility in the movement of the foundation,” says Xavier DeMeulder, marine operations manager, Suomen Hyötytuuli Oy. “The Synchoist wireless control was excellent, enabling us to make adjustments of as little as 5cm during the installation.”

During installation, the level of the foundation was measured, and where necessary adjusted, at every stage of the lift. At the quayside before the lift – this was to establish the centre of gravity for each foundation, on the vessel, just above the water, 3-4 m into the splash-zone, and 5 cm above the foundation.

Continue Reading
688
Share LinkedinTwitterFacebookEmailWhatsApp
Subscribe to our newsletter
Sign up here to get the latest news, updates and special offers delivered directly to your inbox.
You can unsubscribe at any time
Leave a comment