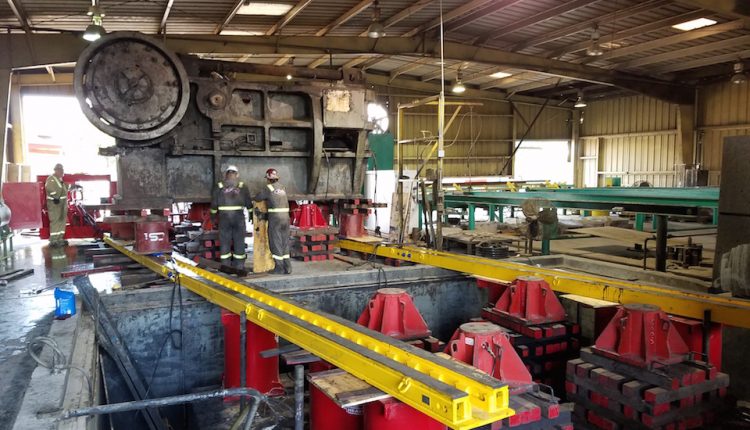 Houston, Texas-based Fagioli Inc. used its 500-ton capacity Hydra-Slide HT500 heavy track hydraulic skidding system and other rigging equipment to remove a 230,000-lb. pipe bending machine and replace it with a spare system.
Fagioli accepted a scope of work to remove the existing machine from a pit, slide it to a loading area, load it onto a hydraulic trailer and repeat the operation in reverse with another pipe bender that was kept in storage for replacement purposes. Both systems were identical in weight and measured 18 ft. x 10 ft. x 8 ft.
Fellow Texas company, Cowboy’s Services Inc. (CSI), a Wallisville-based heavy haulage specialist, won the contract for transportation of the machines and sub-contracted Fagioli to execute the replacement operation. All parties combined over three days of planning and a further three days to complete successful installation in the upgraded fabrication shop.
Edoardo Ascione, president and managing director at Fagioli Inc., said: “We already had plans to acquire a Hydra-Slide skidding system and securing the order [from CSI] was the tipping point to proceeding with the purchase. Given that we already had the contract, we were reliant upon Hydra-Slide’s speed of delivery and efficiency of service to honor our commitments, which we gratefully received, allowing us to accomplish the challenging task in hand.”
The HT500 is frequently chosen as the most cost-effective and accurate tool for moving, loading or unloading all types of heavy loads, including transformers, generators, compressors, pressure vessels and other machines where a rigid, load carrying track is required. In this case, appropriate skid track sections were selected to accommodate the dimensions of the pipe bending machines and the travel distances involved.
The team also used four 200 ton capacity Fagioli hydraulic climbing jacks and timbers to raise the machine 6 ft. out of the pit before commencing the slide over 60 ft. Ascione explained that due to limited headroom, the combination of climbing jacks and skidding equipment was the only viable solution to replace the machine. The HT500 has a total height of only 8 in. (205mm), saving jacking time and suiting the product to such confined spaces.
Ascione added: “The design information for the machines was not complete, as is often the case for such equipment. We estimated the center of gravity based on how the machine was supported in the pit. The capacity of the jacking system was a lot more than required, as a measure of safety. Once the jacks took the load we could confirm the position of the center of gravity and carry on the replacement operation.”
CSI chief operating officer Keith “Bubba” Jannise and Simone Gabrielli, operations manager at Fagioli Inc., oversaw the project in combination with additional representatives of both companies. Ascione concluded: “Keith, Simone, Hydra-Slide and others demonstrated the role collaboration has in challenging heavy rigging applications. Without bringing together such varied products and engineering expertise, this project wouldn’t have been possible.”
Ascione also confirmed that Fagioli has two further applications lined up for the HT500, which he described as “easy to set up and smooth to operate”. He also anticipates placing additional orders for hydraulic skidding systems in due course.

Continue Reading
FagioliHeavy LiftingHydra-Slide
678
Share LinkedinTwitterFacebookEmailWhatsApp
Subscribe to our newsletter
Sign up here to get the latest news, updates and special offers delivered directly to your inbox.
You can unsubscribe at any time
Leave a comment