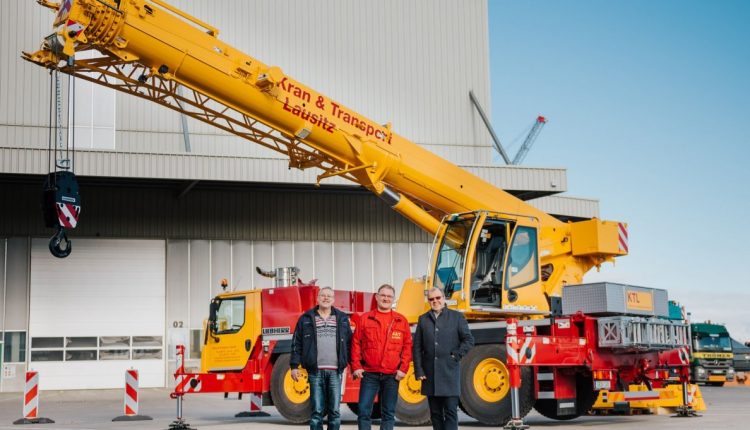 A new LTM 1050-3.1 is going to Schleife in the District of Görlitz in East Saxony. Family-run Kran & Transport Lausitz will use the Liebherr 50-tonne mobile crane to replace a 15-year-old LTM 1045-3. One important criterion behind the purchase decision was that the LTM 1050-3.1 can carry the majority of its counterweights on public roads. That means it can be used quickly and flexibly as a taxi crane.

Company owner Mario Klar, who came in person to take delivery of the crane at the Liebherr plant in Ehingen, said: “We wanted a three-axle mobile crane, which can carry as much ballast as possible. That is why we decided to buy the LTM 1050-3.1. It is a great addition to our crane fleet between our two and four-axle cranes.” The LTM 1050- 3.1 carries seven of its total nine tonnes of ballast on public roads with an axle load of 12 tonnes.

Kran & Transport Lausitz operates five mobile cranes with lifting capacities of up to 90 tonnes with a 7-strong workforce. The majority of the company’s work involves open- cast lignite mining, often maintenance and repair work. Another major area of work is the construction of small to medium-sized industrial buildings.

Lausitz, a region in eastern Germany, which also includes parts of Poland, is regarded as having a comparatively weak structure. It is one of the regions which have been particularly hard-hit by the phase-out of coal. The impending structural change requires both new ideas and courage. And these are precisely what Kran & Transport Lausitz traditionally has in abundance: “My father Wolfgang Klar founded the company shortly after the reunification of Germany in 1991 and was called “The man with courage from Lausitz” in the press. Courage is still important because we are continuously having to adjust to change. This also includes keeping our crane fleet at a high technical level so that we can satisfy the requirements of the market”, commented Mario Klar, who continues to steer the family-run company on the same basis as its founder.

Continue Reading
2,165
Share LinkedinTwitterFacebookEmailWhatsApp
Subscribe to our newsletter
Sign up here to get the latest news, updates and special offers delivered directly to your inbox.
You can unsubscribe at any time