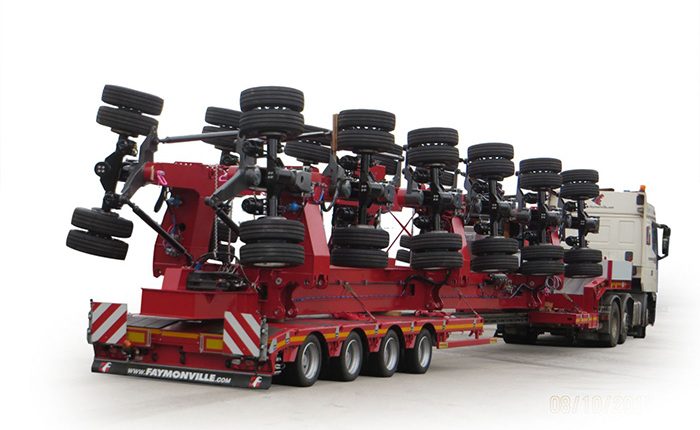 With the DualMAX, Faymonville is making inroads with North American companies because it can easily widened and adopted for their unique needs.

The modular semi-trailer can be widened in a loaded condition and was designed for the special requirements of heavy goods traffic in North America.

According to Paul Hönen, Faymonville’s sales manager in North America, specific features characterize this product line. “All axles under load can be easily and securely widened from 14 to 20 ft,” he said. “We’ve baptized this unique and pattened principle the ‘lift & shift.’ In this way, the loading platfrom can be adapted to the size of the load or its distribution on the ground.”

He said that the steering system doesn’t need to be disassembled for the widening process, and the swing axle technology guarantees optimal maneuvering. The DualMAX meets statutory provisions that apply in the United States and Canada.

“Faymonville’s DualMAX has a very strong and torsion-resistant chassis with high point-load capacities on the central beam and the outer frames,“ said Earl Sutton, owner of American Heavy Moving & Rigging. “At 10,000 lbs. per axle line, the DualMAX has an optimal payload to net weight ratio.” The flexible vehicle concept permits a load per axle line of 52,900 lbs. at 50 mph.

With the frame foldable to less than 10 ft., return transport is easier than a conventional semi-trailer. The chassis of the DualMAX is zinc-plated, thus offering the best corrosion protection available on the market.

Continue Reading
357
Share LinkedinTwitterFacebookEmailWhatsApp
Subscribe to our newsletter
Sign up here to get the latest news, updates and special offers delivered directly to your inbox.
You can unsubscribe at any time
Leave a comment