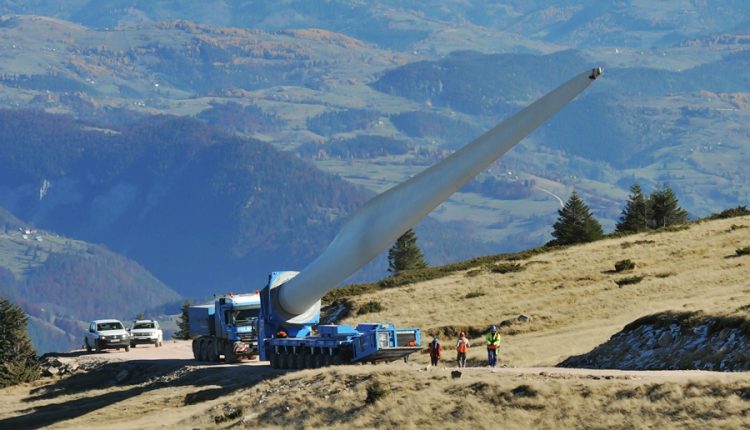 Felbermayr has transported five wind turbines from the Black Sea port of Constanta to the Carpathian Mountains in northwestern Romania.

On arrival in Constanta, the turbine components were transported 700 km by road to a storage site, located around 1,200 m above sea level. Here the components were unloaded using two mobile cranes and set down ready for final delivery to the wind farm site.

A temporary road had been constructed through the forest in order to transport components to the wind farm, which was located at an altitude of 1,800 m.

According to Felbermayr branch manager Christian Krieger, the most challenging part of the delivery involved moving the 44.5 m long wind turbine blades to the site.

In order to navigate the steep gradients, Felbermayr used a bespoke blade lifter mounted on an eight-axle self-propelled transporter to deliver each of the 15 blades. Krieger explained that transporting each of the blades 15 km by road to the site took eight hours.

The turbine’s tower sections, each of which weighed up to 60 tonnes, were moved using a 14-axle self-propelled transporter, while the 72-tonne nacelles and smaller tower sections were transported to the alpine site using a 10-axle modular trailer.

Felbermayr used an LR1600 crawler crane, equipped with a 105 m main boom and 12 m luffing jib, as well as 225 tonnes of ballast, to install the turbines, which stood at a final height of 105 m.

Continue Reading
421
Share LinkedinTwitterFacebookEmailWhatsApp
Subscribe to our newsletter
Sign up here to get the latest news, updates and special offers delivered directly to your inbox.
You can unsubscribe at any time
Leave a comment