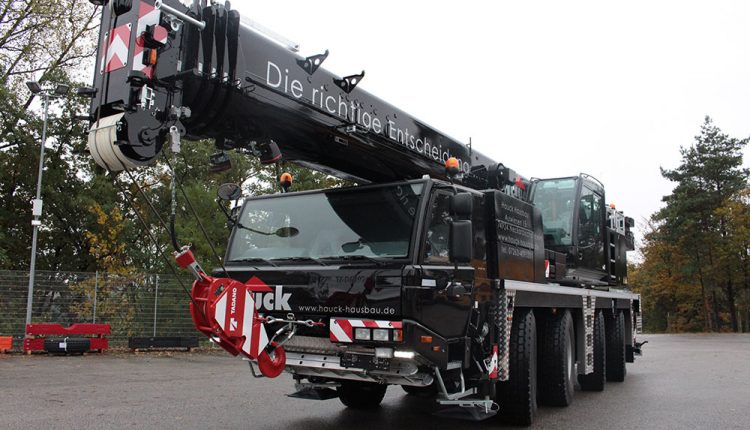 The first TADANO mobile crane belonging to Hauck Hausbau GmbH, an ATF 70G-4, came on the recommendation of a business associate from the crane sector. Since delivery of the TADANO in November 2016, the machine has consistently delivered the expected performance. Sebastian Hauck stands for the second generation of the family-owned company Hauck Hausbau from Neckarbischofsheim in Baden-Wuerttemberg. He explains the decision for the ATF 70G-4 version with the shorter 44 m boom: “In our business, the lifting capacity for the increasing component weights is clearly the number one concern. Height is not a priority in our core business concerning detached houses, bungalows or urban villas.” This is just what the powerful boom is ideal for.

But according to Sebastian Hauck, economic aspects also speak in TADANO’s favor. Thus, the low fuel consumption rates specified by the manufacturer have proved reliable. This is supported by TADANO’s dual-engine concept, as each engine is ideally dimensioned for its task – driving or crane operation. Moreover, maintenance or replacement of spare parts is extremely straightforward, as these tasks could be performed using standard parts, and the Service staff are available on site in no time.

The fact that it was a 4-axle machine which was purchased in the end is due to the arguments presented by the TADANO sales force. In addition to the ATF 70G-4’s transport weight, its high manoeuvrability was convincing which makes the taxi crane a multi-talent within Hauck Hausbau’s range of action, namely approximately 50 kilometers.

Accordingly, the “newcomer” has been operating almost continously since its delivery, and has proved its extraordinary potential with enormous success. Indeed, its second operation consisted of the exacting task of positioning an extra storey on an existing building. Thanks to the ATF 70G-4, the Hauck Hausbau team managed this challenge within a surprisingly short time, according to Sebastian Hauck when talking about the project. To this effect, the company uses special construction materials in order to create the internally developed climate- and nature-sensitive building envelope. This is because sustainable, energy-efficient and ecological building is a distinguishing feature of Hauck Hausbau. To this effect, the compact and powerful mobile crane from
Lauf / Pegnitz has proved to be the ideal working equipment.

Hauck Hausbau GmbH
Hauck Hausbau has been providing people with homes of their own for over two decades. The family-owned company from Neckarbischofsheim identifies itself by its high quality standards which are reflected by application of innovative planning and manufacturing technologies in line with the high-quality materials used. The internally developed climate- and nature-sensitive building envelope with its healthy design which is open for diffusion and its optimum insulation ratings stands for the innovative power of the company.

Continue Reading
Tadano
597
Share LinkedinTwitterFacebookEmailWhatsApp
Subscribe to our newsletter
Sign up here to get the latest news, updates and special offers delivered directly to your inbox.
You can unsubscribe at any time
Leave a comment