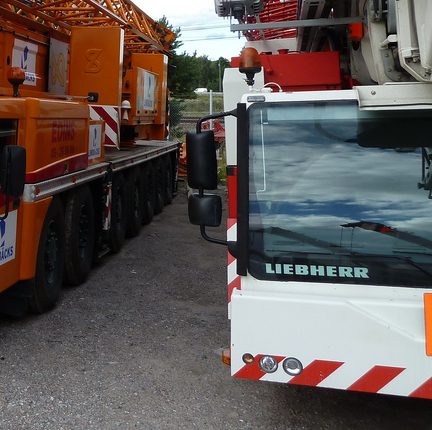 In an area of 320,000 m², eight Liebherr tower cranes are responsible for handling the material. Seven of which are used within a confined area that has a high density of cranes on virtually a third of the construction site. The cranes being used are four 630 EC-H 40 Litronic top-slewing cranes, three 550 EC-H 20 Litronic type cranes as well as a 20 SE fast-erecting crane.

The building work commenced in spring 2011, with the erection of the first Liebherr tower crane. It is envisaged that 13 Liebherr tower cranes in total will be required for the construction of the Karolinska Solna university hospital in the Swedish capital, Stockholm. The hospital construction project is currently one of the largest building projects in Europe and one the largest public private partnership (PPP) projects in the world.

The construction phases have been split into six stages, and completion is expected to take place in 2017. In terms of the current planning, the last tower crane will be dismantled in 2015.

The Karolinska Solna university hospital will be a centre for highly specialized healthcare, research and education, which will work closely with the Karolinska institute and the medical university, as well as other universities and the life science industry in Sweden and abroad.

Continue Reading
Liebherr-Werk Biberach GmbH
443
Share LinkedinTwitterFacebookEmailWhatsApp
Subscribe to our newsletter
Sign up here to get the latest news, updates and special offers delivered directly to your inbox.
You can unsubscribe at any time
Leave a comment