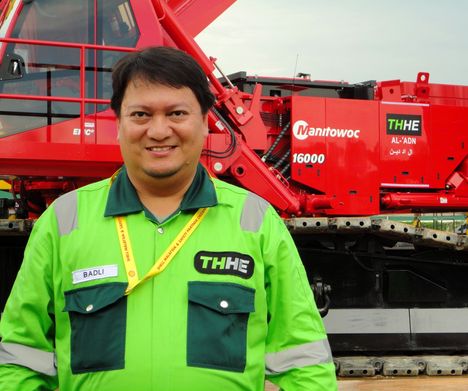 Four Manitowoc 16000 crawler cranes are working on the Lac Alfred Wind Farm, the biggest wind farm in Canada and one of the largest in North America. Located near the village of Amqui, Quebec, the project consists of 150 wind turbines. Upon completion, the farm will have a capacity of 300 MW.

The four Manitowoc 16000s, which were rented from Guay, a Quebec-based rental company, are lifting the top sections of the wind towers, the nacelles and the full rotors. The heaviest component the cranes are lifting are the 72 t (79 USt) nacelles, which need to be hoisted to the top of the 80 m (262 ft.) high towers.

The project at Lac Alfred has not been easy due to mountainous roads and frigid winter temperatures. The project has also experienced temporary delays due to extreme snowfalls. Icy wind blowing from the St. Lawrence River also caused with the cranes’ booms to frost.

“The Manitowoc 16000 does a fantastic job in rugged conditions,” said Guillaume Gagnon, assistant to the president of Guay. “The crane has good uphill, downhill and side slope tolerance that allows it to travel over rough terrain while completely assembled.”

“The four Manitowoc 16000s turned out to be the most cost-effective, productive and simple solution,” said Gagnon. “Despite the wide range of difficult conditions we have encountered in the mountains, the Manitowoc 16000s have been excellent workhorses — durable, reliable and simple to operate, and they have taken a load of stress from our shoulders.”

Continue Reading
368
Share LinkedinTwitterFacebookEmailWhatsApp
Subscribe to our newsletter
Sign up here to get the latest news, updates and special offers delivered directly to your inbox.
You can unsubscribe at any time
Leave a comment