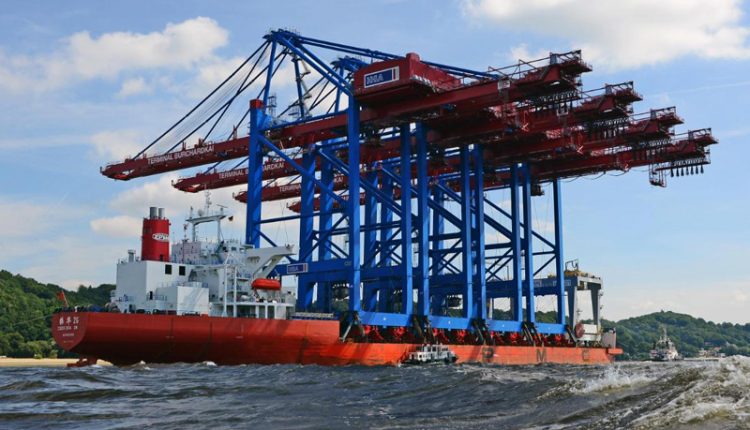 Following an eight-week voyage from Shanghai to Hamburg, four state-of-the-art container gantry cranes arrived on August 8th at the Container Terminal Burchardkai (CTB). The new container handling equipment will be used at the Waltershof port, together with a fifth gantry crane which will depart Shanghai for Hamburg in the autumn. CTB staff thoroughly tested the container gantry cranes produced in the vicinity of Shanghai before accepting them from the global market leader, ZPMC. They will go into operation consecutively over the next few months.

The launch of the newly delivered cranes will mark the completion of the quayside expansion programme at the CTB’s Waltershof port. With its 1.4-km quay, the Waltershof port will now have four mega-ship berths, with a total of 15 gantry cranes.

Dr. Stefan Behn, who is responsible for the Container segment on the Executive Board of Hamburger Hafen und Logistik AG (HHLA), emphasises the significance of this new container handling equipment: “These new cranes will enable the Container Terminal Burchardkai to handle the 18,000-TEU ships which have just gone into operation. It is crucial for us to be able to offer this service to our customers in good time, as these ships are commissioned. Our investment in these state-of-the-art gantry cranes underlines HHLA’s commitment to technological leadership. The increased handling capacity of the cranes on the quayside will improve our ability to meet these container mega-ships’ tight schedules. This is extremely important for our shipping customers due to the continuing delays in the dredging of the river Elbe. The acquisition of the container gantry cranes thus marks the completion of a cornerstone of the expansion programme at the Container Terminal Burchardkai.”

ZPMC’s new gantry cranes are designed for container ships with 24 transverse container rows. Thanks to their 74-metre jibs, they are very well equipped to handle the first 18,000-TEU ships with their 23 container rows, which have just gone into service. The cranes have also been optimised in terms of the height of the jib. They can handle nine containers on top of one another on deck. The new cranes can also operate in tandem mode. One hub makes it possible to move two 40-foot containers or four 20-foot containers. Each gantry crane weighs 2,400 tonnes and can handle a maximum payload of 110 tonnes.

The gantry cranes were transported on a converted tanker. This ship – which was originally designed for a load of 80,000 tonnes – had no trouble handling the cranes’ total load of around 10,000 tonnes. Over the past few years, ZPMC has become the global market leader, not least because this Chinese company offers its customers the possibility of accepting their equipment at the production site near to Shanghai and for its subsequent transportation to the site of operation, where the final handover takes place.

Continue Reading
389
Share LinkedinTwitterFacebookEmailWhatsApp
Subscribe to our newsletter
Sign up here to get the latest news, updates and special offers delivered directly to your inbox.
You can unsubscribe at any time
Leave a comment