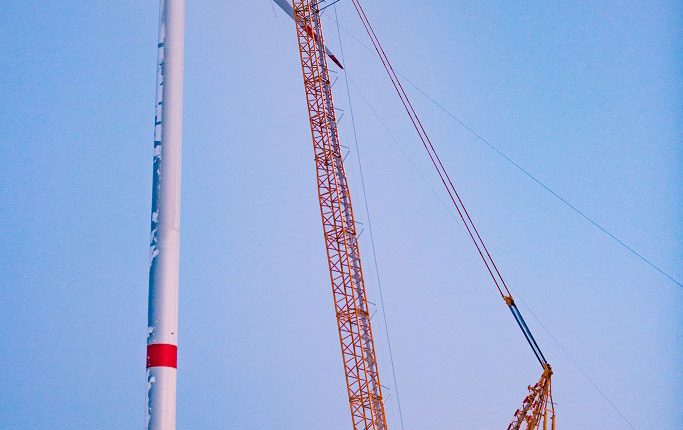 Franz Bracht gets a boost

Heavy lifting specialist, Franz Bracht Kran-Vermietung GmbH of Erwitte, Germany, mobilized its crew and high capacity crane equipment to Lüderitz, including the Terex® Superlift 3800 lattice boom crawler crane, to quickly and efficiently install the new power generation equipment. Crew members transported enough boom and jib components plus superlift structure and counterweight for the 165-m boom configuration required for the turbine erection process that they have completed many times over the years and throughout Germany.

For this installation, however, the massive crawler crane was equipped for the first time with a new type of boom configuration and frame option that increased crane capacity and improved rigging efficiency. Eric Jahn, six-year crane operator for Franz Bracht adds, “With the new options, we can achieve a performance increase of 30%, meaning we get more lift capacity.”
Increased Radius

Standing between Franz Bracht’s crews and turbine erection were curbstones, which forced crews to slightly adjust the lift plan on the Lüderitz application. “The curbstones surrounded the wind turbine, which kept us from getting as close as we would have originally liked for the lift,” explains Jahn. “However, the Boom Booster kit enabled us to erect the tower sections without a problem.”

The new Boom Booster kit increases the stiffness of the main boom by increasing boom width from the standard 3 m to a width of 3.5 meters. Up to seven booster sections with 12-m lengths can be installed on the crane’s main boom, allowing it to reach an impressive maximum hook height of 174 m. The boom kit comes standard with the Terex Cranes fall protection system, and its design allows two additional boom sections to “slide” into the Boom Booster kit during transportation to eliminate the need for at least one truckload. “This can result in up to €1,000 in transportation savings, depending on the crane configuration,” points out Guntram Jakobs, Product Marketing Manager Terex Cranes.

Even with curbstones requiring the use of a longer lift radius, the Superlift 3800 crane easily handled the task. Turbine erection advanced quickly and seemingly nothing could stop Franz Bracht from completing construction at the wind farm, until a major snow storm with high winds slowed progress to a crawl.

Even with the mid-season storm delaying progress for nearly three weeks, Franz Bracht was still able to complete the work on time and within budget using the Terex Superlift 3800 crane with the new Boom Booster kit. “My coworker and I have been operating the crane for about two months, and we can definitely tell the difference with the Boom Booster kit,” comments Jahn. “We’re really looking forward to working every day with this crane. The bottom line is that a tremendous crane has been made better and more powerful.”

Continue Reading
Terex Corporation
553
Share LinkedinTwitterFacebookEmailWhatsApp
Subscribe to our newsletter
Sign up here to get the latest news, updates and special offers delivered directly to your inbox.
You can unsubscribe at any time
Leave a comment