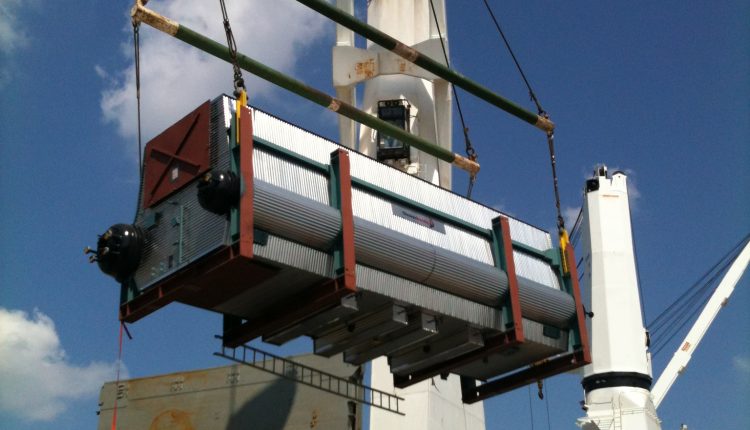 From plains to shining sea – an American tale

In-house boiler expert (or glutton for punishment) and project manager, Neel Ratti has just returned from the USA, where he has overseen a complex shipment of a biomass boiler from Lincoln Nebraska to loading at the port in Houston Texas. The unit, which weighs 75 metric tonnes and measures 13.5 x 4.8 x 3.8m, was produced by a specialist manufacturer in Lincoln Nebraska, and is bound for Plymouth uk.

Avid followers of this website will recall a very similar shipment of a biomass boiler from inland China, via Shanghai to Trieste and finally delivered by road to the customers’ half finished power plant in Venice, Italy. Those familiar with the report will also remember the difficulty and pain endured by Neel to get the job done. They will also remember there were actually 2 reports. The company decided to send him once again, possibly because of his patient perseverance and tenacity in a bad situation. Most probably however because of his expertise and experience in shipping similar units across China.

Neel packed his bags and made the 4000 mile journey to Lincoln, where his task was to guide operations on the ground for the loading of the boiler onto a specialist, 13 axle, 45 metre, low load trailer. The first leg of its long journey was to be on the highways of the USA, a 1100 mile road trip across 4 states through the notoriously stormy ‘tornado corridor’. After some trouble with the trailer, mechanical faults and a blow out along the way (try changing a flat tyre on a low loader with a 75 tonne payload!), the unit finally made it to Houston port right on time.

The plan was to load the boiler onto a container ship directly from the truck using a floating crane. Memories of China came flooding back however as the shipping line failed to plan their port operations and the unavailability of the crane meant that they were unable to load on the planned vessel. Worse yet was the terminals’ refusal to accept the cargo early for the next vessel a week later. Just as in China the quandary was where to take the boiler for storage in time for the next vessel.

Various options were examined, and working with the team in UK, Neel arranged for the cargo to be taken to a different terminal at short notice. Changing US road permits and altering the route for a 60 metre long convoy is no easy task. Using a variety of arm-twisting techniques and frantic arrangements on both side of the atlantic. The line accepted the cargo early for a vessel leaving at a similar time and as luck would have it the arrival in Europe was scheduled at just the right time for the receiver in UK. Upon arrival the cargo was unloaded from the truck using 2 spreader beams supplied by the port at the last minute. The lift was completed quickly and efficiently by the terminal staff inside the line’s transit shed.

Neel followed the boiler down to Houston and attended the port on the day to watch the operation to load the cargo on board a conventional liner service. First the unit was moved from the transit shed into position alongside the ship. Arrangements had been made to use a port mafi for the short movement across the quayside. The lift was performed smoothly using the ship’s crane and the 2 spreader beams used to unload the truck. The stevedores completed the entire operation including the positioning of dunnage on board in under 30 minutes. All that was left was the securing and lashing on board by the stevedores under the supervision of the cargo super and the surveyor employed by Tuscor Lloyds to oversee the operation.

The multi modal shipment of this vital component for a new power station in Plymouth UK still has a long way to go. Currently on its way to Antwerp, the boiler will be loaded there onto a trailer for shipment tithe UK. No doubt there will be more adventures on the way, but that story will be for another day and another report. Watch this space…

Continue Reading
featured
586
Share LinkedinTwitterFacebookEmailWhatsApp
Subscribe to our newsletter
Sign up here to get the latest news, updates and special offers delivered directly to your inbox.
You can unsubscribe at any time
Leave a comment