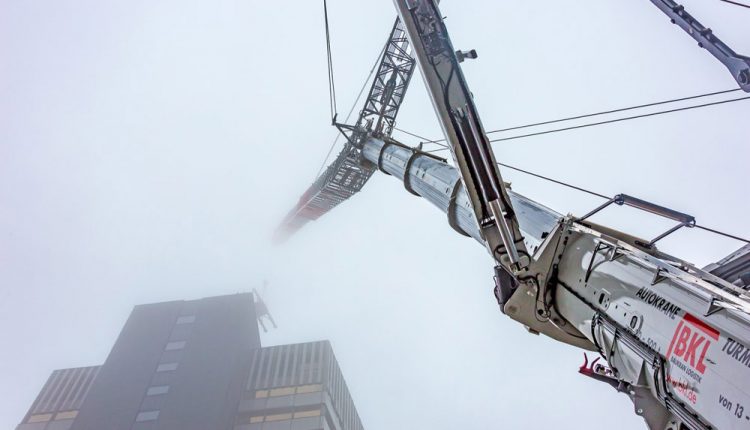 German crane specialist BKL Baukran Logistik has used a Grove GMK6400 to lift parts of a 24 t (26.5 USt) derrick crane atop a 94 m (308 ft)-high bank in Eschborn, northwest Frankfurt. The derrick crane is needed to conduct roof refurbishment in the area.

With a fleet of more than 460 construction and mobile cranes, BKL is one of the largest manufacturer-independent, full-service providers of crane solutions in the country. Its Frankfurt branch was selected for the ambitious job due to its considerable experience in installing construction cranes. Edwin Weidner, manager of the mobile crane division at BKL’s Frankfurt site, oversaw the entire project, which was carried out by a seven-member team.

“Installations in this altitude are challenging, especially under winter weather conditions,” he said. “But as we are used to working at these altitudes and in confined spaces, we were able to offer our customer a sophisticated mobile crane solution. For this particular project, our customer had only 48 hours to install the derrick crane; we also had to mount and dismount our mobile crane in that time slot. We chose the GMK6400 due to its fast, self-rigging Mega Wing Lift, light components (especially the grid/grate parts) and ease-of-operation.”

The GMK6400 lifted the single parts of the derrick crane in sections – first the steel substructure and then the individual crane elements – where it was then assembled on the building’s roof. The GMK6400 was required to reach heights of 131 m (430 ft) and lift up to 7 t (7.7 USt) at a 43 m (141 ft) outreach.

BKL has almost 50 years of experience in the sale and rental of cranes and services. It purchased the GMK6400 in August 2017, and it has since been in almost continuous use. The 400 t (441 USt) capacity GMK6400 offers the best lifting capability of any six-axle mobile crane and includes a self-rigging Mega Wing Lift capacity-enhancing attachment. The main boom is 60 m (197 ft) and, when working with its luffing jib, the crane can perform lifts no other six-axle or even seven-axle crane can currently achieve. It also features a wider carrier cab, and a single engine to power both the carrier and the superstructure, reducing the crane’s overall weight and improving fuel economy.

In addition to the GMK6400, BKL also owns a GMK6300L and a GMK5250L, which are also in regular use in Frankfurt and other BKL sites across Germany.

Continue Reading
Grove Cranes
848
Share LinkedinTwitterFacebookEmailWhatsApp
Subscribe to our newsletter
Sign up here to get the latest news, updates and special offers delivered directly to your inbox.
You can unsubscribe at any time