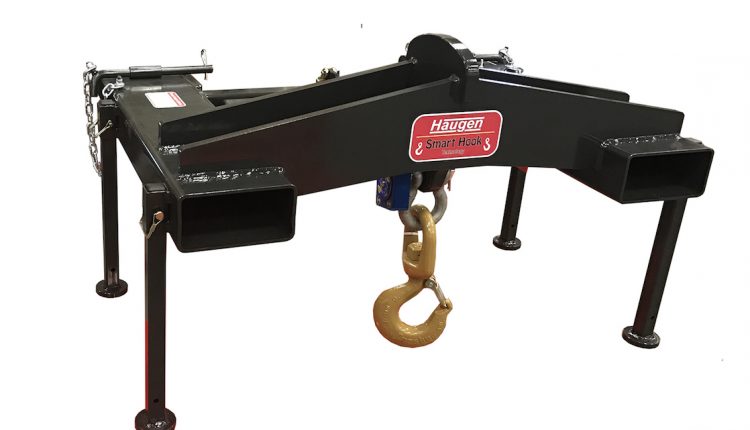 Forklift and telehandler accessories manufacturer Haugen Attachments is offering the innovative Smart Hook, an attachment that incorporates a 7.2-ton (14,000-lb.) capacity Straightpoint load cell.
The 225-lb. Smart Hook can be easily attached to all kinds of telehandlers, giving end users a Crosby swivel hook that incorporates a wireless load shackle positioned at the center of a 42-inch wide and 36-inch long attachment; the attachment holds the lifting hook at 24 inches on center. Four legs act as storage stands to keep the load cell off the ground, which can be removed or left in place during use.
Straightpoint’s wireless load shackle is primarily used in low headroom applications. Boasting an anodized, aluminum electronics enclosure, an internal chassis provides IP67 / NEMA6 environmental protection even with the battery cover missing. The Smart Hook concept utilizes the technology to measure loads and ensure telehandlers are not used beyond their rated capacities. Operators typically read data via a device in the cab.
Jeff Haugen, general manager, Haugen Attachments (the company is owned by his mother, Carol Haugen, CEO), said: “The beauty of the system is that there is no installation required, allowing the unit to be moved from one machine to another in seconds. Further, it gives an accurate load measurement without confusing set-up or programming. It is a safe and simple solution.”
Haugen explained that the product was conceptualized in response to increased use of telehandlers on U.S. jobsites and the lack of another load measuring device in the marketplace. The company has been manufacturing hooks without load cell technology for many years. The new hook has proved popular with both sale and rental markets; the latter has been keen to capitalize on its interchangeability and divide rental rates over multiple applications.
Haugen said: “Telehandlers have the ability to lift and extend out a load. They have load charts for each position but in most cases the end user does not know the weight of each load they are lifting, which should be confirmed before the operator extends out the boom. The Smart Hook allows the operator to weigh the load and consult their load chart before starting a lift.”
Haugen offers the product in different sizes, with the most popular being its 14,000-lb. (7-ton) capacity unit. Much of the telehandler marketplace is covered by the 8,000-lb. to 12,000-lb. capacity equipment range. However, Haugen has the capability to manufacture the Smart Hook up to 30,000-lb. capacity.
David Ayling, director at Straightpoint, said: “The Smart Hook concept leverages the inherent benefits of the wireless load shackle in limited headroom applications. We’re always excited to see innovative use of our technologies and the Haugen team has opened up a new marketplace for the product. As industry trends suggest there will be continued increase in telehandler utilization in North America, it’s exciting to be involved with a product that enhances safe use of the equipment across varied agriculture and industry sectors.”
Operators drive telehandler fork tines onto the Smart Hook; it is secured into position with pins behind each tine with an additional safety chain and hook, Haugen explained.

Continue Reading
AttachmentsCrosbyLoad Cells
733
Share LinkedinTwitterFacebookEmailWhatsApp
Subscribe to our newsletter
Sign up here to get the latest news, updates and special offers delivered directly to your inbox.
You can unsubscribe at any time
Leave a comment