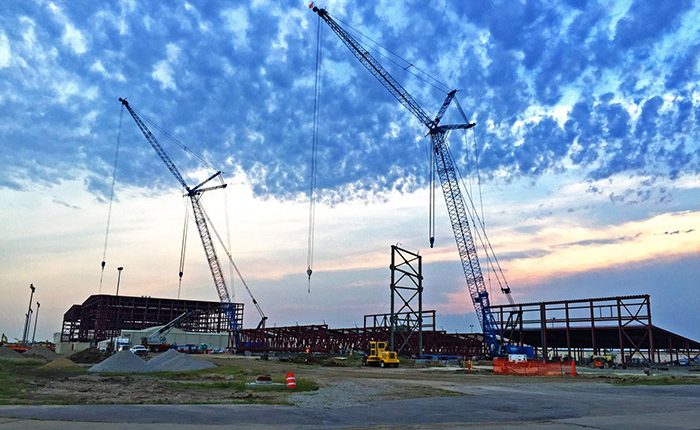 The $148 million contract calls for the construction of more than 380,000 sq. ft. of hangar space for the Air Force’s next-generation KC-46A tanker.

The steel trusses, some weighing more than 480,000 lbs., were picked and placed individually utilizing two Manitowoc 2250 crawler cranes. The feat was accomplished with a zero lost-time safety performance.

“The critical lift plan was circulated and studied among the safety professionals and all of the staff on site that were involved with the crane operations. Having that meticulous plan in place raised the level of awareness on how the picks were supposed to be performed, and most importantly, performed safely,” Ridgeway said. “The completion of this task is a tribute to the dedication of the safety officers working together and in conjunction with the field operations staff so that all of this work could take place without any injuries.”

The complex task was completed within an accelerated schedule, forcing crews to mitigate any inclement weather, including potentially high winds that can occur across the Kansas plains. “Kansas winds – both speed and ever-changing direction – were certainly the biggest challenge and safety concern. Both of those factors were closely monitored and parameters for wind speed and direction were established in the pre-lift meetings before any of the picks could proceed,” Ridgeway added.

In addition to a 175,000-sq.-ft., three-bay general purpose hangar, the project includes a 145,000-sq.-ft., two-bay corrosion control/fuel cell hangar and a 69,000-sq.-ft. general maintenance hangar and aircraft parking apron. The overall project is scheduled for completion in February 2017.

Continue Reading
416
Share LinkedinTwitterFacebookEmailWhatsApp
Subscribe to our newsletter
Sign up here to get the latest news, updates and special offers delivered directly to your inbox.
You can unsubscribe at any time
Leave a comment