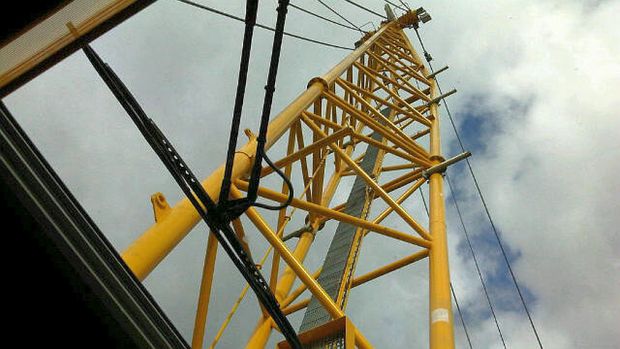 A 60-metre-tall mobile crane has changed the skyline on the Thunder Bay waterfront.

The CEO of the Thunder Bay Port Authority said he hopes to have the crane — which has a life expectancy of 20 years —lifting cargo off ships by the fall.

“We’re really hoping it brings in a lot more cargo,” Tim Heney said. “We need inbound ships in Thunder Bay. We’re the biggest export port on the seaways, but the inbound cargo is something we’re trying to achieve with this machine.”

The mobile crane can also transfer cargo coming from the west to ships travelling down through the Great Lakes.

Heney said obtaining it has been a personal goal of his “for quite some time.”

“I envision this crane will take us to a new level where we can do things like pipe and steel products, containers, a wide variety of things,” he said.

He noted the crane — which has more than 100 steel steps leading to its top — will help Thunder Bay attract ships that don’t have their own cranes.

Heney said he hopes it will also help establish a liner service between Europe and Thunder Bay.

Continue Reading
421
Share LinkedinTwitterFacebookEmailWhatsApp
Subscribe to our newsletter
Sign up here to get the latest news, updates and special offers delivered directly to your inbox.
You can unsubscribe at any time
Leave a comment