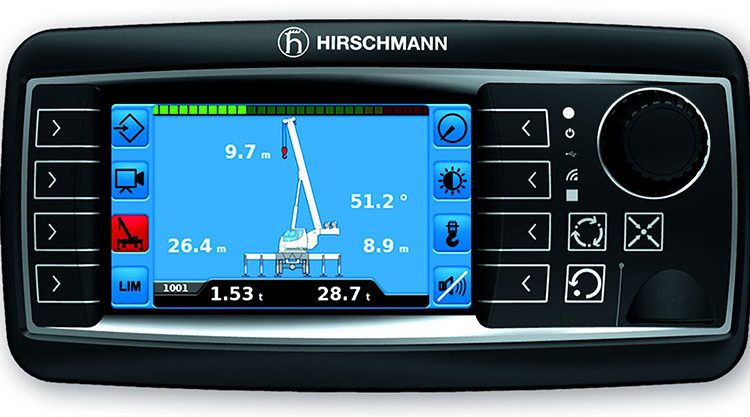 Among the items that Hirschmann MCS introduced at ICUEE were the qSCALE I2 / I3 load moment indicator, vScale D6 HMI display, and PRS90 wireless indicator.

The system offers the flexibility of a 4.3” (qSCALE I2) or 7” (qSCALE I3) color graphic display that features superior HMI graphic interface for easy operation. The console was designed with a IP66/67 protection rating which is suitable for use in both non-cab and in-cab applications. Setup of the crane parameters and LMI functions are done through a new and easy to use Configuration Tool. The system also features a simplified calibration procedure through a menu-driven process to reduce calibration time. The qSCALE I2 / I3 meets the requirements of OEM and aftermarket applications.

The vSCALE D6 console is high-resolution, 12-in. HMI interface for mobile applications. The aluminium casting, features like 1024 MB of RAM, and a significant number of analog and digital I/O offer reliability under extreme environmental conditions.

The PRS90 features a 4.3” color graphic display with user friendly navigation allowing the operator to easily set limits and modify sensor configurations. The system’s flexible design allows for monitoring single or up to eight sensors including combinations of load, anti-two block, boom angle, and wind speed. With an IP 66/67 rating, the console can be mounted either inside or outside of the cab.

Continue Reading
406
Share LinkedinTwitterFacebookEmailWhatsApp
Subscribe to our newsletter
Sign up here to get the latest news, updates and special offers delivered directly to your inbox.
You can unsubscribe at any time
Leave a comment