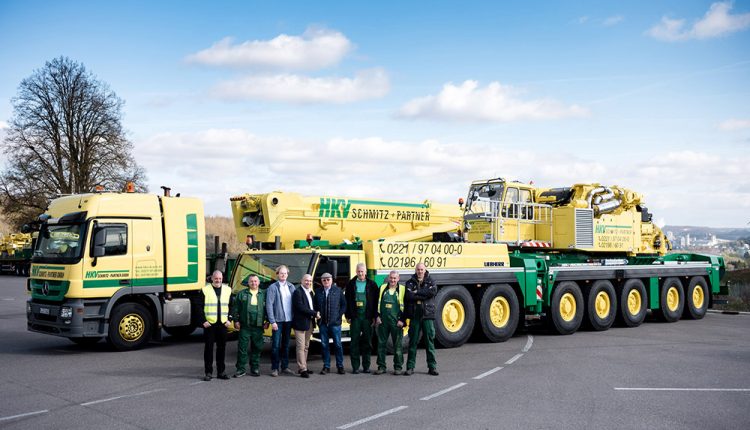 In April, Cologne-based crane rental company HKV Schmitz & Partner GmbH took delivery of its second Liebherr LTM 1500-8.1 mobile crane in a year. The company will use the new crane to replace a 7-axle LTM 1400-7.1, to position itself better for the higher requirements for repairing and repowering wind turbines. To improve transport logistics, Liebherr has designed a solution to fit and remove the telescopic boom quickly and easily. That enables the LTM 1500-8.1 to be driven without the boom, reducing its gross weight to less than 60 tonnes. This significantly increases its mobility on public roads.

Managing Director Herbert Schmitz explains: “Although the removal of the telescopic boom takes an hour, we are subject to fewer regulations from the authorities and no longer have to take long diversions. For example, we can drive over more bridges which saves time and distance. The increased mobility outweighs the additional time by far.” His son Michael Schmitz goes on: “It also means that we are no longer exclusively restricted to driving at night and we do not need a police escort. That makes us significantly more flexible. It’s also a great benefit for our personnel.”

Over 500 Liebherr LTM 1500-8.1 mobile cranes have now been built and delivered to customers worldwide. Herbert Schmitz says: “The Liebherr 500-tonner is a time-tested machine which handles well and holds its value. The LTM 1500-8.1 is a universal machine and we’re getting more and more jobs for 500-tonners. We are delighted that Liebherr is listening to ideas from the market and is adding new technology to cranes which have been on the market for some time. In practice, that is a great help to us.”
HKV uses both LTM 1500-8.1 throughout Germany and believes that this is a great advantage since the ballast slabs can be used on both cranes, meaning that no ballast transport is required in many cases. It is also easier for the crane drivers and the team to operate several identical cranes with the same technology.

HKV has now been trading successfully for more than 20 years, initially only renting mobile cranes. Heavy haulage services were added later. The company now has a workforce of 45 and operates around 25 mobile cranes, all from Liebherr.

Continue Reading
Liebherr-Werk Biberach GmbH
557
Share LinkedinTwitterFacebookEmailWhatsApp
Subscribe to our newsletter
Sign up here to get the latest news, updates and special offers delivered directly to your inbox.
You can unsubscribe at any time
Leave a comment