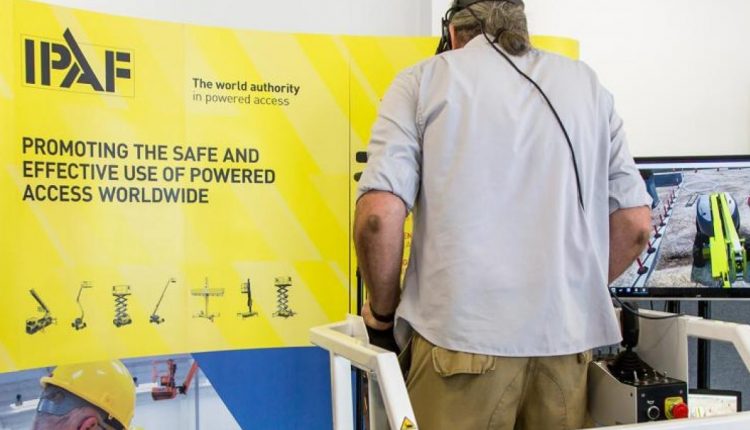 After several months of development and fine-tuning, the International Powered Access Federation (IPAF) has announced it is ready for “controlled trials” of its PAL+ advanced operator assessment in a virtual reality (VR) environment using MEWP simulators.

In 2018, IPAF led an industry-wide consultation into this exciting new technology and produced a detailed strategy paper based on the findings. IPAF members worked with IPAF to produce a policy document on how virtual reality systems can be effectively and safely harnessed to train MEWP operators. This led to a ground-breaking set of recommendations that are being implemented throughout 2019, the first of which was to integrate IPAF’s existing globally-recognised operator training into the VR realm.

In July 2019, following extensive development work and fine-tuning involving IPAF staff and member companies, including senior instructors and experienced MEWP operators, IPAF will commence controlled trials involving some of its training members to deliver PAL+ training that will test candidates using sophisticated MEWP simulators instead of real machines. The other elements of the PAL+ course, notably the theory module of the course and the pre-use inspection, will be conducted as usual at an approved IPAF Training Centre.

Giles Councell, IPAF’s Director of Operations, who has been leading in the development of IPAF’s training in new and next generation applications, comments: “There is no doubt that the powered access industry is on the cusp of a VR revolution, with MEWP simulators now so advanced that IPAF is confident that they can now form an integral part of delivering candidate training and assessment.

“After last year’s consultation and the analysis of the feedback received, and working very closely with IPAF member firms, it’s our considered view that, while we still want to see people taking their basic operator instruction using the real machines, for more advanced operators who are well used to using the machines in real life, we can be confident of assessing their skills and behaviours using these incredibly realistic simulators.”

The trials are taking place on specific simulators that have been approved for this purpose by IPAF’s training department. Giles Councell adds: “Working with some of our largest training provider members in both Europe and the US, IPAF will now embark on proving trials testing genuine PAL+ training candidates in the way we would do normally, but with the assessment taking place on a simulator rather than a real-life MEWP. If they pass their assessment using the simulator, they will be issued with their certification to PAL+ as usual, so these are not ‘dummy runs’.

“If the trials prove successful we will look to fully develop the IPAF PAL+ course into eLearning and VR by developing a digital version of the theory module and simulated pre-use inspection, to be launched later in the year. It’s a very exciting step forward and one that could revolutionise and enhance the ways our accredited training centres deliver IPAF courses.

“This year IPAF also launched an updated version of its MEWPs for Managers supervisor training in eLearning, while the theory element of IPAF’s operator course leading to the PAL Card has been available in eLearning for some time; I think the direction of travel in terms of embracing and adopting new technology is clear to see.”

IPAF’s PAL+ operator training was developed in response to increasing demand from contractors for a recognised qualification demonstrating advanced operator proficiency and signifying a certain level of experience in using different types of MEWPs in a variety of challenging environments and scenarios.

Currently not all IPAF approved Training Centres offer PAL+ training, in part owing to the significant investment required to purchase specific types of MEWP equipment and the need for a large and secure training area containing structures around and through which the candidates must operate during their assessment.

It is hoped that by moving the PAL+ course into the VR environment, this will open up IPAF’s advanced operator training as a viable option to more approved Training Centres, and in turn make it more attractive to training candidates who will need to spend less time away from the worksite to successfully complete the assessment.

IPAF continues to work closely with members and those developing VR systems to assist the industry in recognising new opportunities to apply and adopt new technology in training, safety awareness and equipment familiarisation, and to enhance the safe and effective use of powered access worldwide.

Continue Reading
1,339
Share LinkedinTwitterFacebookEmailWhatsApp
Subscribe to our newsletter
Sign up here to get the latest news, updates and special offers delivered directly to your inbox.
You can unsubscribe at any time