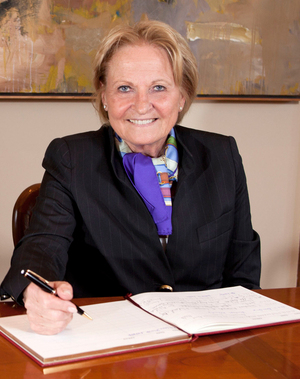 On 8 June 2012, Dipl.-Kfm. Isolde Liebherr, Vice-President of the Supervisory Board of Liebherr-International AG of Bulle, Switzerland, the parent company of the Liebherr Group, was awarded an honorary doctorate of Laws (LLD honoris causa) by the National University of Ireland in Cork, Ireland.

In his laudation, J. Philip O’Kane, Emeritus Professor and former Dean of the Faculty of Engineering, paid tribute to the outstanding achievements and successes of Isolde Liebherr. Following the death of Dr.-Ing. E.h. Hans Liebherr in 1993, she and her brother Dr. h.c. Dipl.-Ing. (ETH) Willi Liebherr successfully continued her father’s legacy, tripling the size of the globally operating family business.

At the same time, O’Kane stressed the close ties that Isolde Liebherr has maintained with Ireland for many years, in particular with the region of Killarney. The Group has operated a production site and a number of hotels in Killarney for more than 50 years. He used the opportunity to thank Isolde Liebherr for her support for Irish charitable organisations such as the “Kerry Parents and Friends Association”, which provides support for disabled persons and their families.

The Liebherr Group has been present in Ireland since 1958 and currently employs well over 700 members of staff in three companies operating in the fields of maritime cranes, construction machines and hotels. In recognition of her achievements, especially in and around the region of Killarney, Isolde Liebherr was also presented with the freedom of the town in May 2012. In her acceptance speech, she emphasised her close ties with Killarney and stressed that the Liebherr Group will uphold its commitments there in the future.

Continue Reading
Liebherr-Werk Biberach GmbH
416
Share LinkedinTwitterFacebookEmailWhatsApp
Subscribe to our newsletter
Sign up here to get the latest news, updates and special offers delivered directly to your inbox.
You can unsubscribe at any time
Leave a comment