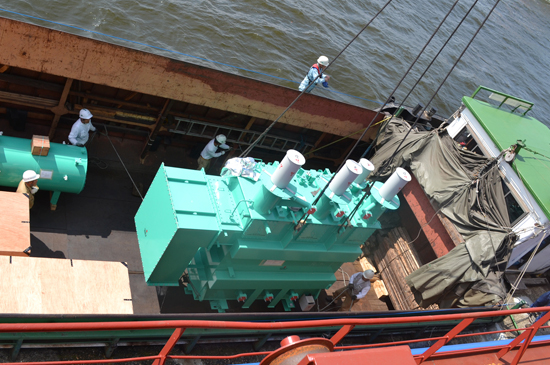 Tuscor Lloyds continues its participation in logistics projects for the Oil, Gas and Energy Industry in Mexico.

Tuscor Lloyds was recently asked by a natural gas company in Mexico to assist with the multimodal transport of parts needed to repair a transformer which had been damaged in the previous year.

The equipment originated in Kobe, Japan where it was built by the Mitsubishi power generation division in Japan, the cargo consisted of 63 packages weighing in at 45 tons and 125 m3.

The first phase of the shipment was divided into 2 parts; the first part with the MGCB system and its accessories was safely loaded onto a 40 foot flat rack container. Every stage of the loading operation into the depot as well as its subsequent transport and loading onto the vessel, were supervised on site by the agents and surveyors nominated by Tuscor Lloyds. The shipment departed from the Port of Kobe on time and incident free, fulfilling successfully both the shippers and consignees expectations.

The second part of the first phase of this shipment involved the air freight shipment of a total of 8 packages weighing 150 Kg; this cargo also included some hazardous goods which had to be specially accommodated for. The cargo took 4 days to fly from Japan to Mexico and once landed the cargo continued onto its final destination.

The second phase of this shipment involved the transport of a auxiliary transformer main body and accompanying parts, the cargo which was to be shipped as sea freight was a total of 51 packages weighing 31 tons with 70 cbm.

The vessel scheduled to pick up the cargo was delayed entry to the port due to a typhoon in the area but was granted access 7 days later than scheduled. The cargo was loaded directly from a barge onto the main transport ship and the vessel departed the very same day. A member of the Tuscor Lloyds project management team travelled to Kobe to oversee the operations and safe loading. Besides operational supervision by Tuscor Lloyds and its Japanese agents, a maritime surveyor verified all the operations were made as planned.

Tuscor Lloyds continues its participation in the oil, gas and energy logistic industry and thank the continuous support of its clients and partners.

Continue Reading
577
Share LinkedinTwitterFacebookEmailWhatsApp
Subscribe to our newsletter
Sign up here to get the latest news, updates and special offers delivered directly to your inbox.
You can unsubscribe at any time
Leave a comment