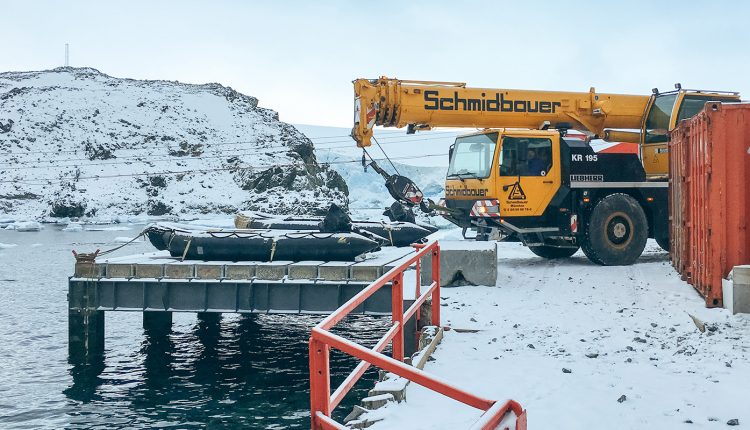 Journey into the eternal ice

14,400 kilometres, 53 days and 4 different ships: it took a few strokes of logistical genius to transport a mobile crane to its destination on Earth’s southernmost continent. This is how it all began.

It’s December, 21st 2017. Three days before the Christmas holiday, Schmidbauer, a system service provider of crane technologies, receives an order approval from the German Aerospace Centre (DLR): one Liebherr LTM 1040-2.1 mobile crane is to be transported to Antarctica to help redevelop a polar research station. ‘After that, it was a race against time’, recalls Minka St. James, who managed the Antarctica project at Schmidbauer. ‘The crane needed to be shipped within just two weeks, or else we would have lost a whole year.’ Options for transporting equipment to Antarctica are extremely limited. The last stage from the southern tip of Chile to the research station is only possible through a joint effort by the German Aerospace Centre and the Chilean military.

Another challenge came in the form of strict environmental regulations. Ships are not permitted to dock directly at the pier next to the research station to avoid disturbing the penguin population that lives on the island. Instead, they must offload their cargo onto pontoons, around two kilometres off the coast. However, these shallow floats, similar to rafts, can only carry loads of up to eight tonnes. So within the span of two weeks, Schmidbauer must not only deal with the challenge of transporting the crane to Antarctica, but also dismantle it into individual parts and then plan how to reassemble it on site once it arrives.

‘Despite the difficult conditions, it was clear to us that a delay was not an option’, explains Minka St. James. By the beginning of January, the crane’s individual parts were shipped out from Schmidbauer’s headquarters in Gräfelfing near Munich.

Continue Reading
690
Share LinkedinTwitterFacebookEmailWhatsApp
Subscribe to our newsletter
Sign up here to get the latest news, updates and special offers delivered directly to your inbox.
You can unsubscribe at any time