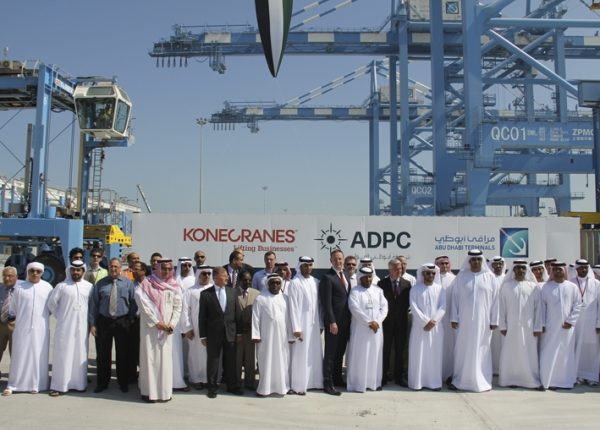 The delivery marks what ADPC calls “a significant milestone for Khalifa Port” as it readies for Phase 1 completion at the same time as the opening of Khalifa Industrial Zone Abu Dhabi (Kizad) in the fourth quarter of this year.

“Phase I of the port is now 95 percent completed, and the arrival of these cranes signals that we are now on the home straight,” said ADPC’s Vice President of Ports, Captain Mohamed Al Shamisi.

The three 44 meter high STS cranes, were designed and constructed by Chinese company Shanghai Zhenhua Heavy Industries Co. Ltd (ZPMC), who are due to deliver a second batch of three cranes in the second quarter of this year.

“I am tremendously proud to be a part of this instrumental project, which will play such a key role in Abu Dhabi’s economic development and promoting new business opportunities,” said ADPC Chairman, Dr Sultan Ahmed Al Jaber.

“Today, ports in the United Arab Emirates account for 61 percent of the trade volume among GCC countries, having seen a 13 percent annual growth in volume in recent years and growth projections remain positive.”

“With this remarkable, fast-paced growth, ports are striving to be more competitive, efficient and productive for their customers. Khalifa Port is an example of that, as witnessed with the official unveiling of these cranes today,” he added.

On completion, ADPC’s flagship Khalifa Port will be the first semi-automated port in the region.

The port will be equipped to handle an initial capacity of 2 million TEU and 12 million tonnes of general cargo annually.

Continue Reading
524
Share LinkedinTwitterFacebookEmailWhatsApp
Subscribe to our newsletter
Sign up here to get the latest news, updates and special offers delivered directly to your inbox.
You can unsubscribe at any time
Leave a comment