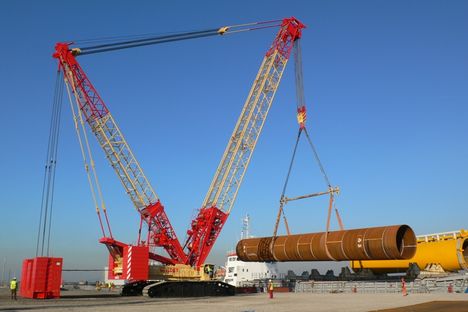 The 6,900 square metre facility is built on a 40,000 square metre plot in Sri City, about 55km north of Chennai and adjacent to a new Kobelco excavator plant, which opened last April.

Kobelco says that it expects to build around 90 units in India this year in the 100, 150 and 250 tonne ranges, with a local content of around 35 percent, rising to 50 percent over the next few years.

The company also says that it expects to win a market share of around 20 percent by 2015, when the company anticipates that the market will have grown to around 700 units a year.

Sin Suke Izumi president of Kobelco Cranes India, speaking at a press conference yesterday, said: “The India plant will soon cater to the markets in the neighbouring countries and will help us sustain and increase our market share in the growing construction equipment market in this country. Local manufacturing will also help reduce the cost of the cranes to the point where they will range in price from Rs2.5 crore ($500,000) to Rs10 crore ($2 million).
Ravindra Sannareddy, managing director of Sri City added: “It is an achievement to have two subsidiaries of the Kobelco Steel Group to start operations within Sri City. We are positive that the success of Kobelco will attract more Japanese companies apart from the 12 that have already established their presence over here.”

Continue Reading
featuredKobelco
454
Share LinkedinTwitterFacebookEmailWhatsApp
Subscribe to our newsletter
Sign up here to get the latest news, updates and special offers delivered directly to your inbox.
You can unsubscribe at any time
Leave a comment