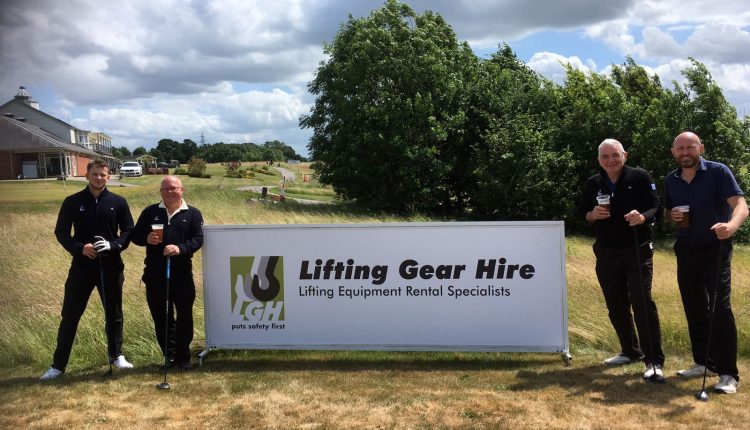 LGH, a lifting equipment hire company, secured full membership in LEEA, the world’s leading representative body for all those involved in the industry, earlier this year. The association’s annual Golf Day is a significant event, hosted by a different member company each year (the baton has already been handed to 2019 organisers, Speedy Hire). Record numbers attended with 85 golfers teeing off and a total of 105 people sitting down to a celebratory dinner.

The day is multifaceted in format with a breakfast, round of golf, multiple prizes, three-course dinner, and networking all on offer to LEEA members and staff. Recently appointed CEO Dr. Ross Moloney; Robert Messenger, member engagement services; and Craig Morelli, accredited training manager, made up the association’s playing contingent, while Gemma Palmer-Dighton, events and marketing executive, completed LEEA representation.

Colin Naylor, managing director at LGH, said: “The day couldn’t have gone better. We had a very windy start but luckily managed to avoid the rain and as the day went on we enjoyed some strong sunshine. The Golf Day is great fun but also presents an opportunity to engage with other LEEA members, which promotes sharing of information for continued improvement of industry best practices; we were honoured to facilitate such positive exchanges.”

Golfers competed in seven prize categories, including the Bill Parkinson Trophy, for best Stableford score by a member; the Derek Brant Memorial Trophy, for best gross score by a member; the Tiger Lifting Trophy, for best Stableford score by a guest; the President’s Putter, for best score in the putting competition; nearest the pins on holes 6 and 11; and the longest drive. Hole 11 played host to a charity beat the pro competition, whereby players donated money to St. Luke’s Cheshire Hospice; £800 was raised in total throughout the day. Superb circuit entertainer Billy Flywheel concluded proceedings and left the audience amazed with his zany and enigmatic stage show.

Ian McIntosh, sales director at Eichinger Equipment Limited, took home the Bill Parkinson Trophy with a score of 39, narrowly beating Iain Baxter into second place (37), who was in the same fourball (he won a World Cup replica ball), and third-placed Paul Davies (34). Alastair Verbruggen scored 77 to win the Derek Brant Memorial Trophy; the Tiger Lifting Trophy went to Paul Ludlow (34); Barry Scott won the putting competition; and Verbruggen completed a successful all-round day, shooting nearest the pin on hole 6 and striking the longest drive (also worth a World Cup replica ball). Nearest the pin on hole 11 (beat the pro) was Greg Fardell, who was awarded with a signed and framed Manchester City shirt. Luxury hampers and golf balls were amongst accompanying and standalone prizes.

McIntosh said: “It was fantastic to be part of such an enjoyable, well-organised day. I was surprised to win the competition, particularly as it was a challenging course and time doesn’t allow me to play as much as I’d like to. All credit to the hosts and LEEA for staging the event; Eichinger looks forward to participating again in 2019.”

Naylor concluded: “Congratulations to Ian, other winners, and all participants and guests. Wychwood Park was a fantastic host and players enjoyed a truly demanding but rewarding course. We were even treated to a pint of Moorhouse’s Brewery Malkin Pale Ale at the halfway hut! It was a brilliant day and we would love to organise it again, but in the meantime we look forward to supporting Speedy Hire with our participation next year. Special thanks go to the XSEM event management team, led by Neil Turley, for their perfect organisational work.”

Continue Reading
LEEALGHLifting Equipment
2,225
Share LinkedinTwitterFacebookEmailWhatsApp
Subscribe to our newsletter
Sign up here to get the latest news, updates and special offers delivered directly to your inbox.
You can unsubscribe at any time