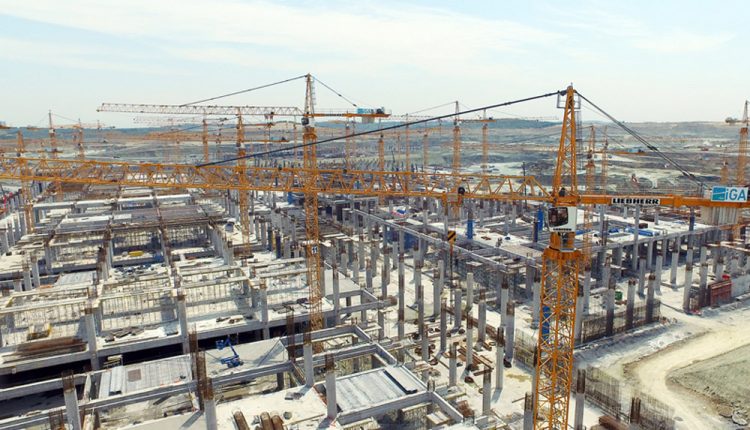 Setting a record that is getting increasingly harder to beat, Istanbul New Airport is the largest planned airport development in the world, with a four-phased project schedule that will see the construction of three terminals and six runways by 2030, with the capacity to handle more than 150 million passengers a year.

In the ongoing initial phase, which involves the construction of the main terminal and the first three runways, the project is scheduled to deliver an opening capacity of 90 million passengers a year by 2018 — which is the same as the throughput of the busiest existing airport, Dubai International Airport.

This isn’t a proposed project, or a stalled project; this a project very much in motion, and there can be little doubt of the ambition behind it — not least in the sense that the infrastructure will pose a major threat to the hegemony of the Gulf hubs over international transit routes through the region.

But PMV Middle East is here to discuss the machinery required to set the plans for a 1.3 million-square-metre terminal in motion in what could arguably, in its own right, be described as a record set-up time for a project of its scale and scope. The fleet of cranes poised over this vast new build site is a single brand fleet of Liebherr cranes: some leased, but 58 of them bought and delivered in a single mega-order by the contractor.

Why Liebherr hardly needs any introduction, the project is still a significant moment and milestone in the Liebherr story, and one which has pushed the capabilities of the German company’s sales and service operations to the very limits of possibility.

Narrow window
The obvious challenge behind the project is the extremely short delivery schedule, with preparatory earthworks on site only commencing in mid-2014, and in terms of the activities of Liebherr on site, the delivery of the full order of 58 cranes within less than a year of the order being signed.

“Like the project as a whole, the time frame for the negotiations was very challenging,” says Dominique Tasch, MD of Liebherr-Werk Biberach, Germany. “We started the negotiations in March 2015 and were able to accept the order in mid-May 2015.”

In fact, the first tower cranes had to be delivered at the end of June, just a few weeks after signing the contract. Together with the extremely short lead times the company was able to provide, the other challenging criteria in the bid for the order was the capacity and specification of the tower cranes.

Tasch explains: “A great deal of expertise is required for major projects of this type to show how to use tower cranes efficiently. To identify how to use the tower cranes most economically, the Tower Crane Solutions department initially researched the complete infrastructure and planned building complexes. The complete crane fleet was then planned on the basis of the project.”

After the technical issues were worked out, the solution arrived at by the Tower Crane Solutions team was a fleet consisting of ten 154 EC‑H tower cranes, thirty-two 280 EC‑H tower cranes and seventeen 200 EC‑H tower cranes. The construction contractor and the dealer then entered negotiations over the conditions for such a large package deal.

In addition to price, these negotiations included lead times, the availability of the defined range of services, spare parts supply and the strength of the on-site service.

Continue Reading
Liebherr-Werk Biberach GmbH
523
Share LinkedinTwitterFacebookEmailWhatsApp
Subscribe to our newsletter
Sign up here to get the latest news, updates and special offers delivered directly to your inbox.
You can unsubscribe at any time
Leave a comment