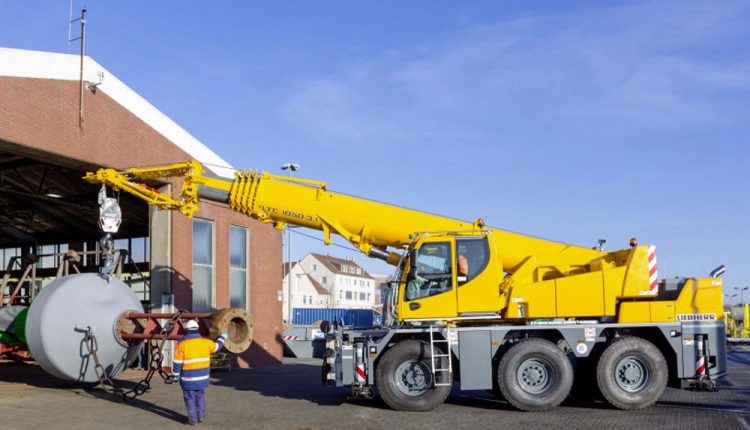 Bremerhaven Waterways & Shipping Office (WSA) took delivery of a Liebherr compact crane of type LTC 1050-3.1 in November 2016. The WSA will primarily use the crane for transporting so-called marker buoys. Loads weighing over six tonnes and up to eleven metres in length must be transported.

These are enormous buoys, also known as sea marks, which are stored in a yard at the WSA in Bremerhaven. Up to 11 metres in length and with a diameter of around three metres, some of these marker buoys weigh up to six tonnes. These marker buoys generally do their duty at sea for five years until they have to be brought back to land for refurbishment. The new Liebherr LTC 1050-3.1 compact crane was purchased to handle these massive markers – you could say it was bought to act as a specialist rotating telescopic loader.

Crane plant in Ehingen managed to meet all the customer’s wishes
The main purpose of the crane is to transport the marker buoys between the yard and the hall, a workshop for structural steel and painting work in which the marker buoys are refurbished and fitted with new signalling systems. In addition, the crane provides the equipment working ships require on the quayside and also helps to load and unload vessels. “In addition to the marker buoys, it loads containers, boats, equipment and machines. Our crane is actually in use every day” reports Wolfgang Witzleb from Bremerhaven Waterways & Shipping Office. Last year Witzleb was given responsibility for purchasing the new vehicle. “We had several special requests and requirements for the new crane but only a few suppliers were able to meet them.” The proposed working conditions at the WSA were actually simulated by Liebherr in Ehingen on a test rig. The rather low door to the workshop at just 5.40 metres was simulated and the crane moved through it carrying an appropriate load. The customer wanted reinforced tyres as well as a modification to the front of the crane so that bull bars could be installed to protect the crane against impacts caused by raised loads.

The crane in Bremerhaven has no storage box on the front. Fitted with an assembly jib which is permanently at an angle of 20 degrees, it generally moves the marker buoys with the mast telescoped only slightly. In this configuration, the LTC 1050-3.1 satisfies the everyday requirements of the WSA Bremerhaven perfectly. Precision manoeuvring using the five steering programs enables the crane to deliver maximum flexibility and manoeuvrability in the restricted spaces in the small workshop and the yard outside it. A remote-controlled safety load hook under the hook block provides additional working safety for fastening and releasing the awkward load.

Previous crane also from Liebherr
The predecessor of the newly purchased compact crane was also supplied by Liebherr. An LTL 1030, a rough-terrain crane developed in the 1990s for transporting loads, performed its duties reliably for the Waterways & Shipping Office for twenty years.
The WSA Bremerhaven has eight transport and working vessels and a workforce of around 300 people to look after a Federal waterway on the River Weser which stretches over 100 kilometres from Brake to well into the North Sea.

Continue Reading
Liebherr-Werk Biberach GmbH
499
Share LinkedinTwitterFacebookEmailWhatsApp
Subscribe to our newsletter
Sign up here to get the latest news, updates and special offers delivered directly to your inbox.
You can unsubscribe at any time
Leave a comment